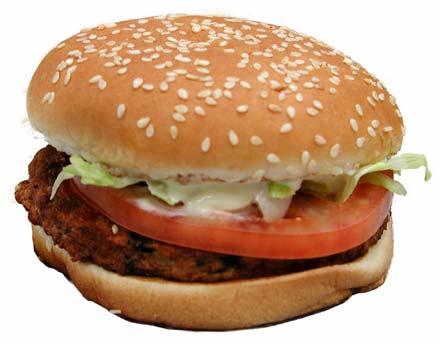 Over the past few months, I’ve heard about the BK Veggie, but I’ve never seen one.

Every time I stepped into a Burger King, I would scan the bright yellow menu board looking for that elusive meatless sandwich, but just like the humor of Everyone Loves Raymond, I couldn’t see it.

I had a theory to the reason why I couldn’t find the BK Veggie. Perhaps being considered the black sheep of the menu kept it off, since it didn’t seem to provide the flame-broiled or deep-fried goodness that people expect when dining with The King.

I also thought it was sold only at participating restaurants, making the BK Veggie sort of an endangered species, like the Humpback Whale, Sea Otter, Komodo Dragon, and cassette tapes.

However, a few weeks ago my boss told me about her encounter with the BK Veggie.

“THE BK Veggie!!!” I said excitingly, like I was a spoiled, little 10-year-old boy getting a $300 iPod from his parents because it was the only way for them to shut him up about how everyone at school has an iPod except him, how he’s so uncool, and how he’ll probably die a virgin.

I had to clean my ears with Kenny G to make sure I heard her right. After she repeated herself, I couldn’t believe her, because during those months of searching for the BK Veggie, I taught myself to believe that it didn’t exist, like Santa Claus, true love, a beer that’s less filling and tastes great, and the duckbilled platypus.

Since she knew I had to see it to believe it, we went on a safari in her SUV to catch a glimpse of the elusive BK Veggie. We didn’t drive far before seeing possible signs of the meatless burger, like it being listed on the drive-thru menu for $2.99.

Fortunately, we were able to capture two of the BK Veggies. I thought we were going to just tag them and let them go back into the wild, but my boss said they were tasty. At the time, I was horrified by her comment, because I thought the BK Veggies were an endangered species. However, my boss ensured me that they weren’t, so I dug in.

I unwrapped the paper blanket that it was in and saw that it looked very much like its meat counterparts. It consisted of the typical sesame seed bun, green/white chopped lettuce, a tomato slice, mayonnaise, ketchup, and a Morningstar veggie patty.

After taking a bite of it, I began to understand why the BK Veggie wasn’t an endangered species. It wasn’t very good. Its taste was like the needles around a porcupine, keeping predators away. The combination of the Morningstar veggie patty, ketchup, and mayonnaise seemed to be much like the stinky spray that comes out of a skunk, preventing those higher on the food chain from attacking the BK Veggie.

I think another reason why the BK Veggie isn’t an endangered species is because it’s slimmer than other burgers, perhaps making it more agile, quick, and less filling. With 420 calories, 16 grams of fat, 2.5 grams of saturated fat, 7 grams of dietary fiber, and 23 grams of protein, it’s somewhat healthier than the more common and easier to catch Whopper.

Item: BK Veggie
Price: $2.99
Purchased at: Burger King
Rating: 4 out of 10
Pros: Veggie patty for veggie lovers. High in dietary fiber and protein. Low saturated fat. It’s not an endangered species. Komodo Dragons.
Cons: A little pricey for the size of it. Just like Britney and K-Fed, ketchup and mayonnaise don’t make a good couple with this sandwich. More sodium than a Whopper. My excessive use of lists in this review. Watching, listening, or being around Dr. Phil. Dying a virgin.