(Editor’s Note: Today, I’m introducing a new section at The Impulsive Buy called The Shopping Cart, which will consist of products that I’ve purchased, but won’t write a full review for, and products that I’m lusting over, but either can’t afford, can’t find, or it’s only available in dark alleys.)

What I’m Listening To That May Sound Perverted, But Really Isn’t…I Promise 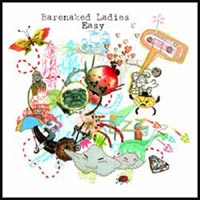 It sounds like there should be something sexual about a song called “Easy” by the Barenaked Ladies, but rest assured there is nothing sexual about it, and I am disappointed about that. However, if it was sung by either Marvin Gaye, Barry White, or the 2 Live Crew, then it probably would’ve been sexual and I would’ve added it to my “Gettin’ It On” mixtape.

It’s a mellow song and is not as fun as many of their previous tracks, like “One Week” and “Another Postcard,” which make me want to grab a hairbrush and lip sync the lyrics in my bathroom mirror. There’s definitely no “Chickity china the Chinese chicken,” but I’m fine with that.

What I’m Drinking That Keeps Reminding Me Of Jay-Z

â€¨When I think of hip-hop and beverages, there are only two beverages that come to mind: Cristal and St. Ides. Cristal has been mentioned in hip-hop lyrics by Jay-Z, P. Diddy, Busta Rhymes, Master P, and I’m sure many others. As for St. Ides, this was what former spokesperson Ice Cube had to say about the malt liquor:

Once again it’s on, I’m gone out the front door.
Ice Cube in the glass house, headin’ for the store.
To get a beer that’s better than the rest.
The S-T-period-I-D-E-to-the-S.
and it will put hair on your chest.
In the black can, so why don’t you grab a six pack and,
get your girl in the mood quicker
Get your jimmy thicker with St. Ides malt liquor.

A few months ago, I tried the Izze Sparkling Pomegranate and every time I drank one all I could think about was “H to the izz-O/V to the izz-A/Fo’ shizzle my nizzle used to dribble down in VA.” For those of you who aren’t down with hip-hop, that’s a line from the Jay-Z song “Izzo (H.O.V.A.).” Get it? Izz-E. Izz-O. Izz-A.

Anyway, its tart taste was good, but not great. However, the pomegranate made me feel like I was drinking something healthy, so it made up a little for the taste. I don’t know if the Izze Sparkling Pomegranate is good enough to make it into hip-hop lyrics, but with Jay-Z’s boycott of Cristal it’s one step away from being, “I got Izze Sparkling Pomegranate, I gotta have it./I’m suckin’ them down like it’s a habit.”

Man, I suck as a rapper.