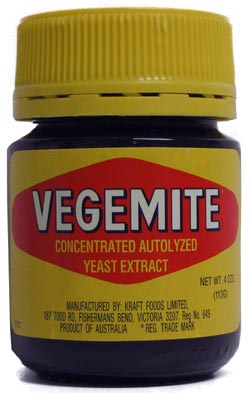 (Editor’s Note: In honor of Steve Irwin “The Crocodile Hunter,” The Impulsive Buy will review an Australian favorite, Vegemite. Irwin was a crazy mofo, but my kind of crazy mofo. He will be sorely missed, even the crikey. Rest in peace, Crocodile Hunter.)

There are things in life that we all must experience. Love and heartache. Happiness and sadness. Taxes and death. Jury duty and public urination. Liking a band and 10 years later realizing how lame they were, like WHAM!

Along with these experiences, we each have our own list of individual things we want to accomplish in our lifetime. My list is long because it contains things like, becoming a millionaire, being on the Today Show, and touching a woman’s boobie, none of which I have accomplished.

Recently my list became a little shorter when I tried Vegemite for the first time. It’s been something I’ve wanted to try ever since hearing the 1982 Men at Work song “Down Under.”

For those of you that aren’t familiar with Vegemite, it’s a Concentrated Autolyzed Yeast Extract, which forms the acronym C.A.Y.E., which ironically spells out the sound that came out of my mouth while running and gagging to the nearest sink after trying Vegemite on Ritz cracker.

Hmm, how can I describe the taste of Vegemite without causing an international incident or losing any Australian or New Zealand Impulsive Buy readers?

I’m probably wrong about this, but I believe that Vegemite was created to disgust foreigners from anywhere outside the Australia/New Zealand area. Perhaps it’s payback for all the horrible things that we Americans have exported to Australia and New Zealand, like Rob Schneider movies.

If that’s the case, I’d like to call a truce.

Item: Vegemite
Price: $2.99 (4-ounces)
Purchased at: World Market
Rating: 1 out of 5
Pros: Puts hair on your chest and if you already have hair on your chest, it will put hair someplace else. Looks like chocolate. Low fat. Wonderful source of riboflavin and gagging.
Cons: Almost made me puke. Salty. Does not go well with Ritz crackers and probably won’t go well with any other cracker. Smells like beef bouillon and tastes like I just tossed someone’s salad. Steve Irwin’s passing.