I personally think the food that best represents the holiday season is the Act II Popcorn Ball, although it definitely isn’t the best tasting holiday food.

Many of you will probably disagree with me and say either turkey, gingerbread cookies, egg nog, candy canes, chocolate Santas, fruitcake, or a large bottle of whiskey are foods that best represent the holiday season, but this is what I’ll say to you, “Nay, my festivus friend, the holidays are all about balls…popcorn balls.”

Think about it. The Act II Popcorn Ball is very similar to many things that are seen during the holiday season. You may not realize them, so I’m going to point them out to you.

First off, it’s round and is roughly the size of a tennis ball (three inches in diameter). There are many holiday-ish items that come in a round form, like tree ornaments, a snowman’s head, a snowman’s body, cookies for Santa, Santa’s big fat gut from eating cookies, and the number of times most people have seen any of the three Tim Allen The Santa Clause movies — zero.

Its white color is also the color of many things seen during the holiday season, like snow, iPods, Santa’s beard, and Jesus’ skin color.

The Act II Popcorn Ball consists of popcorn and sugar compressed together in a tight space. This cramming of popcorn together is much the bringing of people together in any shopping mall on the day after Thanksgiving or the week prior to Christmas.

Instead of popped kernels of popcorn packed tightly together, it’s pissed off patrons waiting in line for a cashier, dressing room, next generation video game console, women’s restroom stall, or $29 DVD player at the Behemoth-Which-Must-Not-Be-Named. 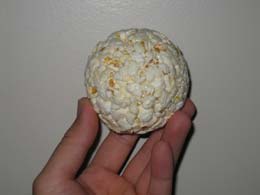 Despite it being held together with sugar, and possibly the holiday spirit, the Act II Popcorn Ball tears apart easily, like the hearts of little children when they find out Santa doesn’t exist. Its consistency is much like old popcorn, but the sugar around it makes that old popcorn taste better, sort of like kettle corn, but not really as sweet or as good.

Wrapping the old popcorn in sugar is very similar to the holiday concept of re-gifting. Think of the old popcorn as a gift from last Christmas, like the sweater grandma knitted, the “I’m With Stupid” t-shirt your stupid friend got you, or the piece of jewelry you were going to give to your significant other, but then they break up with you right before Christmas and every day for the next year you stare at that piece of jewelry and think of your former significant other and cry for about an hour in your bedroom staring at the ceiling, then you want to throw it away but you can’t because every time you’re about to throw it into the ocean you remember all the great times you spent together on the beach, so you keep holding on to that piece of jewelry hoping that your ex-significant other comes back to you, despite the fact that they’re dating another person, and you take it with you every time you’re sitting in your car staring through their window with a pair of binoculars. Then think of the sugar as the new wrapping paper around it, turning what was old into something new for that not-so-special person receiving the gift — probably a co-worker.

With 12 grams of sugar, 100 calories, one gram of fat, one gram protein, two grams of fiber, and no cholesterol, the Act II Popcorn Ball has roughly the same nutritional content as many holiday decorations, like a small Christmas wreath, a Christmas tree branch, or the mistletoe branch that is strategically placed directly above your waist.

Finally, because the Act II Popcorn Ball is made out of popcorn, it’s most likely that popcorn kernel parts will get stuck in between your teeth. If you’ve experienced this, you know that this is irritating like the other holiday annoyances: little old ladies cutting in the cashier line, finding parking at the shopping mall to do Christmas shopping, and making sure the shopping mall Santa doesn’t touch you improperly while taking a picture with him.

Item: Act II Popcorn Ball
Price: FREE
Purchased at: Given by co-worker
Rating: 3 out of 5
Pros: Best food to represent the holiday season. Low fat. Low sodium. Zero cholesterol. Two grams of fiber. Tears apart easily. Sugar makes it taste better. Sort of like kettle corn, but not as sweet.
Cons: Old popcorn consistency. Getting popcorn stuck in between your teeth. Receiving re-gifted gifts. Waiting in line for a women’s restroom stall. Waiting for a woman who is waiting for a women’s restroom stall. Any of The Santa Clause movies. Crying after finding out Santa isn’t real and also after your significant other breaks up with you and leaves you as an empty cold shell of a person.