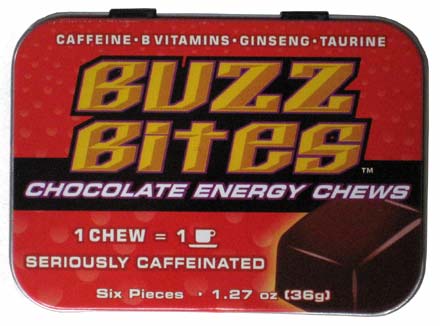 (Note: Since posting this review the company has changed the formula of Buzz Bites. So it probably tastes different now.)

Much like birth control, caffeinated products come in many options, its effectiveness varies from product to product, and is frowned upon by some Mormons.

For those who don’t know, I love sweet, sweet caffeine and over the years I’ve tried a variety of items that contain caffeine, like energy drinks, teas, mints, sodas, gum, coffee, pills, and candy. If I used birth control as many times as I do caffeinated products, it would be the equivalent of me getting laid every single night, which of course is the exact opposite of reality because I am totally not too sexy for my shirt.

Like I said in the first sentence, birth control and caffeinated products are very similar. For example, I personally like to think of energy drinks as the caffeinated equivalent of condoms — they are plentiful, come in a variety of styles and colors, and all of them are too small for me.

It’s a daunting task to be standing in front of either a wall of condoms or a full refrigerated case of energy drinks to pick out the one you like. Words like “twisted,” “pleasure,” “flavored,” “extra large,” “ultra thin,” “reservoir end,” “extra-stimulating,” “warming,” and “tropical colored” pop out when faced with a wall of condoms at your local drug store. (If not, you need to go to a better drug store.)

When in front of a wall of energy drinks at your local convenience store, there are also words that pop out at you, like “xtreme,” “energy,” “taurine,” “guarana,” “crammed,” “ginseng,” “juiced,” “double strength,” and “power.”

Both products even have warnings on them. On an energy drink can it says, “Not recommended for children, Richard Simmons, pregnant or nursing women, Charo, those sensitive to caffeine, or Robin Williams.”

On a condom box the warning says, “If used properly, latex condoms may help to reduce the risk of catching or spreading many sexually transmitted diseases and help control the stupid people population (i.e. anyone who has been arrested on the TV show Cops or anyone who has dated a hotel heiress with the last name Hilton), but unfortunately it is not 100 percent effective.”

Recently, I tried the Buzz Bites Chocolate Energy Chews and I have to say that these caffeinated chocolates are much like birth control diaphragms — both are chewy, aren’t used by many people, and in order for them to work they need to shoved into a damp orifice.

Each individually-wrapped Buzz Bites piece is square, kinda smells like Cocoa Puffs, and is slightly smaller than a Starburst. Despite it smelling like the chocolatey cereal that makes a bird go cuckoo and young kids everywhere hyperactive due to sugar, its taste didn’t come close to making me go cuckoo. It was actually a lot more bitter than chocolatey or sweet, but I should’ve expected that since it only has three grams of sugar.

However, it did turn me into a slightly hyperactive Richard Simmons thanks to my Bedazzler and the 100 milligrams of caffeine each Buzz Bites has, which is roughly the same amount in a cup of coffee. It’s also got energy-producing B vitamins, ginseng, and taurine, which along with the caffeine probably gives the Buzz Bites its bitter taste.

(Editor’s Note: Thanks to Sarah at Vroom Foods for sending me a tin of Buzz Bites. She also sent me a tin of Foosh Energy Mints, which I think are much, much better and contain the same amount of caffeine. Also, Candy Addict reviewed the Buzz Bites last year. You can read their review here.)

Item: Buzz Bites Chocolate Energy Chews
Price: FREE (6 pieces)
Purchased at: Received from Vroom Foods (Warning: Loud link)
Rating: 2 out of 5
Pros: It did give me an energy pick up. A quick way to get caffeine. One piece has the same amount of caffeine as a cup of coffee. Individually wrapped pieces. Smells chocolatey. Birth control.
Cons: Bitter taste. Only six pieces per tin. The Bedazzler. Stupid people who reproduce. A caffeinated Charo, Robin Williams, or Richard Simmons.