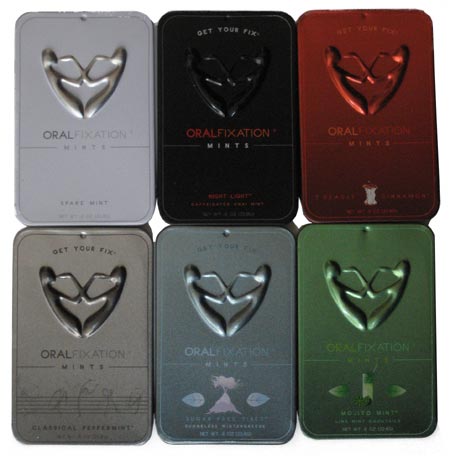 I know what you’re thinking.

With the word “oral” in the name of today’s review subject, the Oral Fixation Mints Variety 6-Pack, you’re probably wondering how many oral sex references will be in this review.

But I also thought the idea would be fun to play with. This caused my head to go back and forth between taking the long hard road or not taking it. I also thought if I should swallow my pride, write the review, and see what people think or if I should spit out the idea.

In the end, I wiped my mouth clean of the oral sex idea and decided to do a classy review of these mints, which would involve me sucking on mints, taking it all in my mouth, and doing it repeatedly until I came to a happy ending.

Question: What are the six flavors in the Oral Fixation Mints Variety 6-Pack and which mints did you like sucking on the most and least?

Answer: The six flavors are 7 Deadly Cinnamon, Mojito Mint (Lime Mine Cocktail), Night Light (Caffeinated Chai Mint), Sugar Free Tibet (Sugarless Wintergreens), Classical Peppermint, and Spare Mint. The mint I enjoyed sucking on the most was the Classical Peppermint, because I’ve sucked on a lot of mints over the years and every peppermint has always tasted good in my mouth. My least favorite was the Sugar Free Tibet mint because it tasted like I was sucking on a Fun Dip stick without the flavored sugar.

Question: I’m a smoker and I love to eat things with onions. My co-workers don’t like to be around me after my smoke break or lunch. Will these mints help with my breath?

Answer: If you’ve gone down are a few hot dogs loaded with onion and sauerkraut, I don’t think any of these mints have the power to mask what you just swallowed. None of the smooth mints in the Oral Fixation Variety 6-Pack come close to the punch that Altoids have. Even sticking more than one mint in your mouth won’t help.

Question: I don’t know if you watched Rush Hour 2, but remember that scene when they go to the massage parlor to find Ricky Tan and they’re allowed to choose among a plethora of hot Asian women. Is having to choose between the six mint flavors anything close to that?

Answer: Wow! That was a long question. Give me a moment to take it all in. A little bit more. I’m almost there. Okay, it’s all in. I have seen Rush Hour 2 and I think the scene when they had to choose among a plethora of hot Asian women is similar to picking which mints to suck on. Just like there were really exotic-looking women in that scene, there were also really exotic tasting mints. The Mojito Mint and Night Light mints were intriguing since they were unusual flavors for mints. The Mojito Mint had a good lime flavor and it was probably my second favorite mint from the bunch. The Night Light mints were caffeinated, but I don’t think there was enough to raise me to attention.

Question: Do you think the Oral Fixation logo on the tin looks frickin’ scary and it also looks like a Mighty Morphin Power Rangers mask?

Answer: Dude, it totally looks like a Mighty Morphin Power Rangers mask! Also, the embossed logo on each of the tins seems kind of creepy to me. When I look at it, I’m afraid the logo will pop out and stab me in an eye. Or they’ll melt off and form a pool of liquid metal, which will turn into a female cyborg hellbent on assassinating John Connor. It also looks like a female praying mantis about to eat her mate right after getting it on with each other. If I was sucking on a fattie, that logo would totally blow my mind.

Question: Did you try all six flavors at one time?

(Editor’s Note: Thanks to Dennis from Details For Men for sending me the Oral Fixation Mints Variety 6-Pack.)