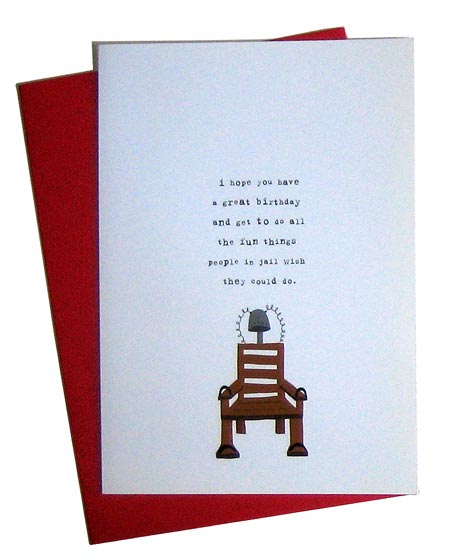 My first girlfriend in college loved giving me greeting cards.

If she loved me more than she loved greeting cards, we might still be together today. Of course, if we stayed together, we probably would’ve had eight kids by now, I would have high blood pressure, I’d be driving a minivan, have a mortgage, The Impulsive Buy definitely wouldn’t exist, and I wouldn’t be writing this review about Uncooked greeting cards.

I learned about her obsession with greeting cards during our first summer apart. She stayed for summer school at the university, while I went home to relax, play golf, and cheat on her.

I’m just kidding about the cheating…or am I? It doesn’t matter now.

Anyway, every week when we were apart, she sent me a greeting card with a letter written in it that let me know how much she missed me. On occasion, she would send me a slightly humorous Hallmark Shoebox greeting card, but most of the time it one of those really serious looking cards with a watercolor painting on the front and with a message in some kind of fancy script that’s usually found on old documents like the Declaration of Independence.

In that fancy script were words from some lonely greeting card writer that usually went something like this: “I watch the river flow by, but my thoughts of you stand still. I close my eyes and imagine that your soul is next to mine. Your image brings a smile to my face and fills my heart with joy, which shall satisfy me until we are able to see each other again.”

Her love of nauseating, overly-poetic, badly-written greeting cards and lack of enthusiasm when giving a BJ made me realize that perhaps she was not the girl for me. It also could’ve been the way she ended every letter with the words, “Your cute little muffin.”

For the record, I never called her my “cute little muffin.”

Yes, I had to say “Nibble. Nibble.” while I nibbled nibbled. It made it cute, okay? She liked it and that was the ONLY time I ever called her a “cute little muffin.”

Today, I still have all those cards she sent me and they sit in a box labeled in big Sharpie pen letters, “Stuff to Burn Later.” I actually wanted it to be labeled, “Stuff to Burn and Piss On Later,” but that was too many words if I was going to write in big Sharpie pen letters. Also in the box are things I regret having, like my Marky Mark and the Funky Bunch cassette single for “Good Vibrations” and a picture of me wearing woman’s bra while doing a handstand.

I can’t have either of those things around if I decide to run for elected office or if I don’t want anyone to blackmail me. Imagine the money I would have to pay for someone to keep their mouth shut about how I played that Marky Mark cassette over and over again thanks to auto-reverse cassette player technology.

Despite my sappy experiences with greeting cards, I actually like sending them to people. As a matter of fact, for Christmas a few years ago, I gave all my friends and family cards that each had one of fifty ways to get on Santa’s naughty list.

I’m really a fan of Uncooked greeting cards, which I bought a bunch of several months ago. Almost every card is shoot-milk-through-your-nose funny, usually in a dark and twisted way, which is the same way I like my women. There are cards for almost every occasion and feeling, from birthday to get well cards. Although, the lack of proper capitalization in all the cards gets the English major in me a little worked up.

Each card costs $3.25 plus shipping, which may seem a little pricey since you could get a $1.99 Hallmark card. Although, I don’t know about you, but all the people in my life right now are worth more than $1.99.

Besides, would you rather receive an Uncooked card that says, “some mornings when i really miss you i cry into my bowl of cereal and eat my tears” or receive a lame card that says, “The void in my heart can only be filled with your love, which seems so far away. When I stare at the moon, I imagine that it is you staring back at me. Because of this, my nights are full of joy, while my days are full of loneliness. I forward to the days and nights full of joy because you are by my side.”

Item: Uncooked
Price: $3.25 per card
Purchased at: Uncookedland.com
Rating: 4 out of 5
Pros: Twisted funny cards. Free envelope. Cards for almost all occasions. The day I get to burn my box of “Stuff to Burn Later.” Auto-reverse cassette player technology.
Cons: Expensive for tightwads, but cheap for those who truly care about the card’s recipient and think money is trivial in terms of showing how much they care. Having to pay for shipping. Lack of capitalization. Nauseating, overly-poetic, badly-written greeting cards.