When you need to make an important decision or come up with the next big idea, there isn’t a better or more useful tool than a monkey throwing poop.

Need to come up with a new twist on an old product? Need a name for your shitty Metallica cover band? Want to know if someone loves you or loves you not, but all the flowers you pick have an even number of petals? Still can’t decide if Rosie was an upgrade, a downgrade, or about the same when she replaced Star Jones on The View? Do you need to develop a new reality TV show that doesn’t involve singing, surviving, sexy singles, or selecting a briefcase?

If you’re faced with any of these situations, a poop-throwing monkey is what you need.

The only things I can think of that are almost as effective with making decisions for someone are Lee Iacocca, the Magic 8-Ball, and overprotective parents.

So how does a poop-throwing monkey work?

It’s actually very simple. First, get a monkey, which you can steal from a zoo, South American jungle, the Playboy Mansion, or animal testing laboratory. Then you need to stick the monkey in a room with targets on the walls. Each one of those targets will represent an idea or a decision.

Then you have to get the monkey to throw its own poop at the targets. You can do this by getting the monkey angry, but in a humane way, because I saw the movie “28 Days Later” and I don’t want to end up infected.

A humane way of making a monkey angry enough to throw poop is to make it watch all the episodes of “Flava of Love” which will make the monkey reject evolution and denounce the belief that humans are “superior,” since it will believe that it is more advanced than anyone on that show.

The new Twix PB possibly smells like the result of a feces-throwing monkey. I created possible targets that were used to come up with the idea of Twix PB, which are below. 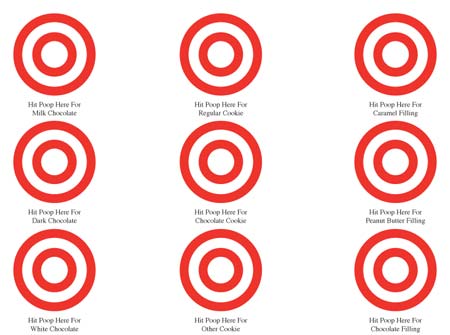 Apparently, the monkey flung its poop to hit the targets for milk chocolate coating, chocolate cookie, and peanut butter filling and let me tell you that the monkey’s poop sure knows how to pick a good combination. The Twix PB has a stronger peanut butter taste and is more flavorful than the regular Peanut Butter Twix, which has a regular cookie instead of a chocolate one.

The Twix PB proves once again that the combination of just chocolate and peanut butter can’t go wrong and that poop-throwing monkeys shouldn’t be feared, they should be rewarded with food, because more food means more poop.