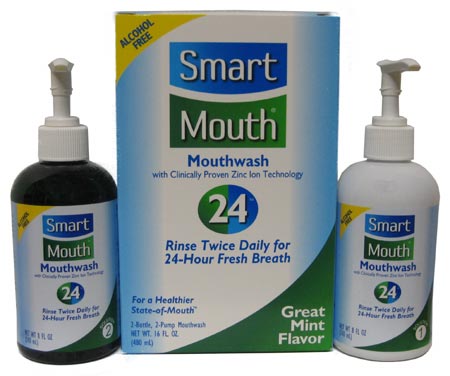 Yo mama is so skinny that when she walks into a Curves all the ladies give her a look that says, “What the fuck you doin’ in here skinny bitch?!?”

Ever since I’ve started using Smart Mouth mouthwash, my ability to produce quality Yo Mama snaps has significantly gone down. You would think with a name like Smart Mouth it would actually improve my Yo Mama insults, but unfortunately that’s not the case.

Instead I’ve been spitting out Yo Mama compliments and I’ve been losing Yo Mama battles with friends, family, co-workers, and random little kids on the playground. How am I supposed to prove how bad ass I am when I’m coming up with lines like:

Yo mama is so beautiful that when she’s at a beach in her bikini all the creepy voyeuristic photographers there only pay attention to her.

This is not helping my street cred or my chances of getting on the MTV show Yo Mamma. I would stop using the Smart Mouth mouthwash to get my Yo Mama snaps quality back to normal, but it actually does a very good job of freshening breath with its “Clinically Proven Zinc Ion Technology.”

Maybe if I think really hard and put a constipated looked on my face to make me look like I’m thinking hard, I might just be able to come up with a decent Yo Mama insult.

Yo mama’s breath smells so good that I totally want to invade her personal space, marry her, and eventually adopt you.

Smart Mouth works much like the chemical bomb in the movie “Die Hard with a Vengeance,” which involves two separate liquids that are pretty much harmless individually, but when mixed together they can do some damage.

Each box of Smart Mouth mouthwash contains two separate solution pump bottles and a mixing cup. According to the box, mix four pumps from each bottle of solution into the mixing cup. Then rinse vigorously with the mild, minty mixture for 30-60 seconds, gargle and spit out. Repeat every morning and night.

Of course, those 30-60 seconds do increase the time of my morning ritual.

The box also did say it contained a 15 day supply, but just like a Sting tantric sex romp, it surprisingly lasted longer than expected. The 8-ounce bottles provided enough solution for four weeks of me vigorously rinsing every morning and night. If it did only last 15 days, the $12.49 I spent on it wouldn’t have been worth it. Although, now that I think about it, it’s still kind of pricey for a four week supply, since a year’s worth will be about $150.

I guess I could go back to selling my body to pleasure middle-aged female Japanese tourists to pay for it, but that might take awhile, since I’m a very cheap male prostitute.

The Smart Mouth mouthwash did freshen my breath and make me feel more confident about myself. Smart Mouth also claims their mouthwash can help with morning breath and thanks to my hot hairstylist and an early morning appointment, I found out that it did help, but not completely, which slightly irritated my hot hairstylist, who did not expect me to come to my appointment without brushing my teeth.

Beside my inability to come up with Yo Mama insults, the Smart Mouth mouthwash temporarily made my mouth feel dry, but that’s probably the “Clinically Proven Zinc Ion Technology” doing its job. But perhaps it’s doing its job a little too well, affecting my Yo Mama abilities.

Yo mama is so young that every time she buys wine, the cashier has to card her, gets surprised by her age, and then asks her what’s her secret to looking so young.

Yo mama is so smart that after winning a million dollars on the game show Who Wants to be a Millionaire, she decided to get a master’s in business administration and go to law school at the same time.

Item: Smart Mouth Mouthwash
Price: $12.49
Purchased at: The-Superstore-Behemoth-Which-Must-Not-Be-Named
Rating: 4 out of 5
Pros: Helps freshen breath. Kind of helps with morning breath. Mixture is mild, since it’s alcohol-free. Bottles lasted significantly longer than what was said on the box.
Cons: Pricey. Possibly having to sell my body to pay for it. Caused me to lose my ability to come up with Yo Mama insults. Increases the length of my morning ritual. Hurts my street cred.