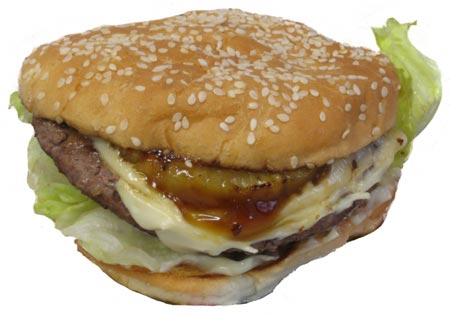 If the new Carl’s Jr. Teriyaki Burger — which contains a grilled slice of Dole pineapple — becomes really popular, I fear that a particular sponge that lives in a pineapple under the sea might not have a home to return to.

After trying the Carl’s Jr. Teriyaki Burger, I think SpongeBob SquarePants might just lose his home, because it’s a surprisingly good burger, which may cause the demand for pineapples to go up. Sure, it may not look very good in the picture above, but you know what they say, “Never judge a burger by the immigrant or high-school-aged minimum wage worker who made it.”

Despite how good it is, I can’t let SpongeBob lose his home, because if he has no home, he might end up coming out of the water and eventually find his way to my apartment on this rock in the middle of the Pacific Ocean.

That would be totally uncool.

A visit from SpongeBob is just like a visit from your extremely racist grandma or non-deodorant wearing European cousin who sweats like a pig. After a little while, you REALLY want them to go.

I can just imagine what it would be like living with him. Sure, it would be fine if SpongeBob just sat quietly in front of the TV and watched the Food Network all day, but just like a drunk Mel Gibson, it’s hard for SpongeBob to not open his mouth and say something irritating or offensive. I think I’d also be irritated by his obnoxious voice or his laugh and I’m afraid of conversations that will go like this:

Marvo: I just bought a bag of chips, do you know where it is? I know you know, you spineless, leeching prick, because there are chip crumbs around your mouth.

He also seems like a messy kind of guy. I don’t want him to be leaving his SquarePants wherever he wants and I hope he doesn’t leave his underwear strewn all over the place, because I’m not touching his SquareTightyWhiteys or SquareThong.

Anyway, along with the grilled slice of pineapple, the Carl’s Jr. Teriyaki Burger also consists of a charbroiled all-beef patty, teriyaki sauce, swiss cheese, lettuce, tomatoes, sliced red onions, and mayonnaise, all in between a sesame seed bun. The idea of having a pineapple in a burger does sound disgusting, and I originally thought so too, but after trying the Carl’s Jr. Teriyaki Burger I found that the pineapple actually enhances the decent teriyaki sauce, giving it a good sweet and salty flavor.

With 660 calories, 61 grams of carbs, 34 grams of fat, 11 grams of saturated fat, 80 milligrams of cholesterol and 1,070 milligrams of sodium, it’s a burger I don’t see myself eating on a daily basis, unless I’m trying to win the role of that fat fuck Sir John Falstaff in the community Shakespeare theater production of Henry IV.

The Carl’s Jr. Teriyaki Burger is a little pricey and isn’t available throughout the country, so there probably won’t be a pineapple shortage anytime soon. However, if SpongeBob does end up at my apartment and irritates me, I’m definitely going to use his absorbent, yellow, porous ass to clean my kitchen counter with lots of elbow grease and Ajax.