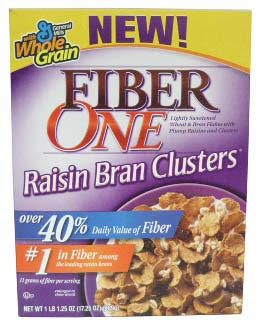 Eating the new Fiber One Raisin Bran Clusters cereal makes me feel a little more mature, since it doesn’t have either chocolate, marshmallows, or commercials on Nickolodeon. When I eat it in the morning, I close my eyes and imagine myself enjoying it at the dining table while reading the editorial page of my local newspaper, rolling my eyes at the crazy people who take the time to jump on their soapbox and write a Letter to the Editor to voice their opinion about how a pothole in front of their driveway proves that the local government is ineffective. Then I respond by asking why the writer of the letter doesn’t call the fucking pothole hotline, which was set up by the local government.

Then I imagine apologizing to my two imaginary elementary-aged children for saying the word “fucking” out loud in front of them, tell them that they shouldn’t use that word in school, and then plead with them to not tell their mommy I said the word “fucking.” Since my children are as cunning as me and my imaginary wife are, they will probably ask for certain toys in return for being silent about the profanity. I tell them that they were both accidents, but I agree to their demands if they also let me cut them out of my will.

I ask them if either of them knows what a will is and they both shake their heads, but they agree to the deal.

The Fiber One Raisin Bran Clusters is only part of my imaginary complete balanced mature breakfast. I’m also enjoying half a grapefruit with a little Splenda sprinkled on top, two pieces of whole wheat toast with Smart Balance spread, and a glass of freshly squeezed orange juice. My children are each enjoying half a papaya and slightly burnt waffles with sloppily-poured syrup that I prepared in my “Mr. Mom” apron. They fight over the syrup and then complain to me about it. I explain to them that sharing is important and that mommy and daddy share things all the time, like shampoo, soap, and the leather strap swing in our bedroom. I also tell them if they don’t share, they’re going to have to eat dry waffles next time and I’m going to force them to watch CBS sitcoms.

Despite being in milk for a few minutes, the dense, lightly sweetened wheat and bran flakes in the Fiber One Raisin Bran Clusters are decently still crunchy. The clusters add a lot more crunch to the cereal and the plump raisins add extra sweetness. It smells like Golden Grahams, but it’s not an overly sweet tasting cereal. It’s also not CBS-sitcom dry and boring. I’m surprised about how good it tastes, since usually most things that have a lot of fiber in them taste very “earthy,” or in other words, like dirt, twigs, and tie-dye-wearing hippies who live in a forest.

A serving of Fiber One Raisin Bran Clusters cereal provides me with over 40 percent of the 25 grams of fiber I should consume each day, which is good because when I’m fifty years old and a camera gets shoved up my ass during my colonoscopy, all the fiber I consumed will hopefully make everything up there okay. I’m also hoping that if I eat enough fiber, I can make paper out of my poop, like they do with elephant and panda droppings.

My wife enters the kitchen and she’s looking hot in her business suit. She grabs a piece of toast from my plate, takes a bite out of it, puts it back on the plate, kisses me on the cheek, leaving crumbs stuck to it, and then thanks me for letting her sit in the leather strap swing last night. Then she grabs my glass of orange juice, takes a swig, leaves a lipstick mark on the lip of the glass, and then out loud wishes that she didn’t brush her teeth before drinking orange juice. The children laugh, but I want to jump her bones so badly because there’s something about her in a suit that really makes me horny.

They agree because my daughter says she’s going to be the next Paris Hilton and not have to do any work or have any skills, while my son says he’s going to be Anakin Skywalker, turn goth, and wear black everywhere he goes.

Sure, the Fiber One Raisin Bran Clusters cereal totally looks like a clusterfuck of Raisin Bran, Honey Bunches of Oats, and All-Bran cereals, but it’s a sweet, delicious clusterfuck.

(Nutritional Facts Per Serving: 170 calories, 10 calories from fat, 1 gram of fat, no cholesterol, 260 milligrams of sodium, 330 milligrams of potassium, 45 grams of carbs, 11 grams of fiber, 13 grams of sugar, 4 grams of protein, 21 grams of other carbohydrates, and a variety of vitamins and minerals.)

Item: Fiber One Raisin Bran Clusters
Price: FREE
Purchased at: Received from PR firm
Rating: 4 out of 5
Pros: Really good. Smells like Golden Grahams. Over 40% daily value of fiber. Sweet, but not too sweet. Crunchy. Paper made out of poop. How hot my imaginary wife looks in a business suit. Having a leather strap swing in the bedroom.
Cons: Accidently broadening my imaginary children’s vocabulary. Not having internal dialogue in my daydreams. Clusters can sometimes get stuck in between teeth. Sitcoms on CBS. It’s all a daydream. Crazy people who write Letters to the Editor because they have nothing better to do. Dry waffles. My Mr. Mom apron.