Being a founding father of America and having my signature on both the United States Constitution and The Declaration of Independence, I get some perks here in heaven. For example, because I loved doing experiments with lightning when I was alive, I sometimes get to create lightning storms.

Although, I haven’t recently because I accidently struck a few people on a golf course in Utah. I kind of find it ironic that I, the inventor of the lightning rod, struck a couple of people holding lightning rods in the form of golf clubs.

Anyway, another perk I get here up in heaven is getting to enjoy delightful food from my beloved colony…Um, I mean…state of Pennsylvania, like the Philly Cheesesteak, stromboli, and lots of Hershey’s chocolate.

The Pennsylvanian food product that I’m most intrigued with is the Tastykake. I’m intrigued by it because it’s the only snack-sized, pre-packaged, and mass-produced pastry that has a name that gives me a clear picture of what I’m about to eat…A tasty cake.

It’s also one of the few snack-sized, pre-packaged, and mass-produced pastries that has a name that doesn’t sound like something I would be offered in sexual explicit spam emails, like HoHos, Ding Dongs, and Twinkies.

Plus, by eating Tastykakes, it doesn’t give Thomas Jefferson the opportunity to quip, “You know, Benji. You are what you eat.” He always says that whenever I eat a HoHo, a Ding Dong, or a Twinkie.

Jefferson is a dear friend, but he’s such a crazy guy.

Did you know that he’s to blame for the crack in the Liberty Bell? There are all kinds of theories behind it, but the truth is that Jefferson wanted to turn the Liberty Bell into a beer funnel, or what the young people of today call a “beer bong.” 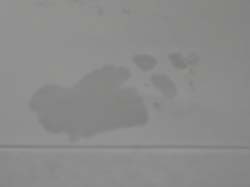 So he grabbed Samuel Adams, who supplied the beer, and myself, who held the bell upside down while he tried to bore a hole into the Liberty Bell. Unfortunately, the hole caused a crack and all the beer spilled onto Jefferson. Oh, it was a sight to behold. Good times. Good times.

Anyway, recently I tried the Tastykake Butterscotch Krimpets, which are Twinkie-sized pieces of sponge cake with butterscotch icing on top. It sounded wonderful, it had a nice moist texture, it wasn’t too sweet, and it tasted all right, but I was slightly disappointed with them because they didn’t seem to have a butterscotch taste at all. However, for some reason, I did detect a slight beef jerky aftertaste.

Besides the beef jerky aftertaste, another thing that disturbed me about the Tastykake Butterscotch Krimpets happened when I placed one on top of two sheets of paper for about 30 seconds. When I lifted it off of the paper it left an oily mark on it. I wouldn’t have noticed this if I had a plate, but heaven has no plates thanks to Jefferson’s attempts to balance spinning plates on sticks.

As I said previously, that Jefferson is a crazy guy.