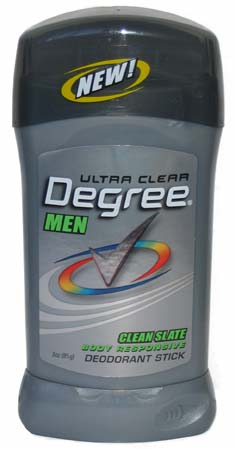 When living in a humid environment, itâ€™s necessary to use some kind of deodorant. If you donâ€™t, no one will invite you to car pool, use the exercise equipment next to you, or want to be in the same elevator as you. Although I have to say, someone stepping into an elevator without deodorant still isnâ€™t as bad as someone farting in an elevator.

Of course, there are advantages to NOT using deodorant, like making it hard for guys to guard you while playing basketball or having a lot of space on the dance floor to break out your pop-n-lock routine.

For the past few years, my deodorant of choice has been the Old Spice Fresh Scent Clear Stick Deodorant, but I decided it was time for a change. Itâ€™s like doing the missionary position all the time. After awhile, it gets pretty boring and you want to try something different.

While shopping at my local drugstore, I planted myself in front of the menâ€™s deodorant shelf and smelled as many as I could, trying to find my new scent. I decided on the Degree Ultra Clear Clean Slate Deodorant, because it just so happened to be in my hands when I thought blood was going to come out of my nose because I destroyed my olfactory system from smelling over a dozen deodorants.

Iâ€™ve preferred clear deodorant sticks over the white solid deodorant sticks ever since I saw LL Cool Jâ€™s performance on MTVâ€™s Unplugged. In case you missed it, during his performance LL Cool J wasnâ€™t wearing a shirt, then during â€œMamma Said Knock You Out,â€ he grabbed both microphones and raised his elbows above his shoulders and there in his hairy armpits were huge white globs of deodorant.

It was probably the only moment that ladies didnâ€™t love Cool James. Ever since then, Iâ€™ve sworn off the white stuff and now I trim my armpit hair.

During the first few days of using it, the Clean Slate scent coming from my armpits was pretty strong, but it was a nice clean scent, so I didnâ€™t mind. I really wanted someone else to smell it to get their opinion, but I didnâ€™t realize how hard it was to find someone to smell my armpits.

Besides the scent, another thing I liked about the Degree deodorant was the way to advance the deodorant out from its container, which involved twisting the whole bottom of the container. The Old Spice deodorant just had a simple knob. Again, I probably think this is cool because of the newness of the bullfrog position.

However, if there was one thing I didnâ€™t like, it was the containerâ€™s concave lip, which will probably make it hard to milk every last bit of the deodorant stick.

Item: Degree Ultra Clear Clean Slate Deodorant
Purchase Price: $2.50
Rating: 3.5 out of 5
Pros: Nice clean smell. Scent might be a bit too strong at first. Trimmed armpit hair. LL Cool Jâ€™s performance on MTVâ€™s Unplugged.
Cons: Concave lip might make it hard to use every last bit of the deodorant. LL Cool Jâ€™s deodorant choice for MTVâ€™s Unplugged. Getting it on in only the missionary position.