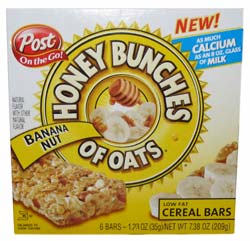 Ever since I started eating these new Honey Bunches of Oats Banana Nut Cereal Bars, Iâ€™ve been acting kind of strange. I guess someone could say I’ve been acting â€œbananasâ€ and â€œnuts.â€

Iâ€™m beginning to think that the saying, â€œYou are what you eat,â€ is actually true.

If you donâ€™t believe me, then listen to the crazy things Iâ€™ve done recently.

Many of you know about my insane McDonaldâ€™s Dollar Menu binge the other week. Besides Ruben Studdard, what sane person would stuff themselves with all that food in one sitting?

Still donâ€™t think I deserve a straitjacket? Well how about me watching hours of the Ashlee Simpson Show, then buying her album â€œAutobiographyâ€ from iTunes, playing it over and over again on my iPod, and learning the words by heart, so I can lip-sync them as well as she can.

I guess I shouldâ€™ve realized something was wrong after eating the first Honey Bunches of Oats Banana Nut Cereal Bar and soon after becoming the winning bidder for underwear on eBay.

However, the cereal bars were good and I saw my eBay purchase as a need for underwear and not as a sign of becoming crazy.

The cereal bars didnâ€™t taste much like the actual Honey Bunches of Oats cereal, even though they had the same crispy flakes and oat clusters the cereal has. I thought it wasnâ€™t as sweet as the cereal. However, these cereal bars were definitely better than the Honey Bunches of Oats with Real Bananas cereal, which The Impulsive Buy reviewed last year.

Besides being good tasting, these cereal bars are also sort of good for you. Each bar has as much calcium as a glass of milk and has nine other vitamins and minerals. However, this isnâ€™t special because the better-tasting Hersheyâ€™s SnackBarz I tried a few months ago, with its crispy rice, marshmallows, and milk chocolate, is a good source of calcium, iron, and seven essential vitamins.

Plus, the Hersheyâ€™s SnackBarz didnâ€™t make me do anything crazy, like eat in one sitting half a bag of Ruffles Light, with the anal-leakage-causing Olestra.

Well I guess I should be glad I didnâ€™t eat any Hostess Ho-Hoâ€™s.