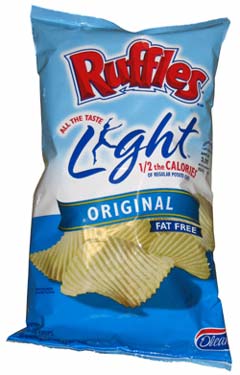 I thought I had accumulated enough good karma to prevent something like this.

I couldâ€™ve laughed and pointed at all those people who fell, tripped, or slipped in front of me, instead of offering them help and seeing if they were all right.

But I didnâ€™t do it because I wanted to accumulate a ton of credits in my good karma bank account. I did all those good things just so I could avoid bad things, like eat a bag of Ruffles Light Potato Chips.

Oh, they tasted much like regular Ruffles and they were less greasy, but any product that turns my ass into a volcano canâ€™t be good. R-R-Ruffles Have R-R-Ridges! R-R-Ruffles Light Causes R-R-Rectal Er-r-ruptions!

If only I were bulimic, all the time spent on the porcelain bowl wouldâ€™ve meant something.

Although, I shouldâ€™ve known it was too good to be true. I knew there must have been some kind of catch. How can a potato chip be fat free and have half the calories of its regular counterpart, and yet still taste the same?

Well I found out the truth the hard way.

Who knew Olean was another name for Olestra?

For those of you who are not familiar with the possible side effects of Olestra, they are: diarrhea, gas, and cramps. I experienced two out of the three, which no matter how you look at it, is a horrible ratio.

I guess it didnâ€™t help I ate half of the bag in one sitting, while watching Behind the Music: Guns Nâ€™ Roses for the sixth time.

I noticed something was wrong when I started having lots of gas. If the amount of gas I was putting out could fuel cars, I couldâ€™ve easily dropped gas prices by a dollar.

Then came the constant trips to the bathroom. For two straight days, I attempted to go running, but within five minutes I found myself running to the nearest restroom.

It wasnâ€™t pretty. Even as I type this, Iâ€™m still experiencing some the effects of the Ruffles Light, which I finished off on Sunday.

What the hell do I have to do to earn enough good karma to prevent something like this from happening again? Do I have to get Jen and Brad back together? Take down Walmart? Or rescue Britneyâ€™s baby shortly after itâ€™s born?