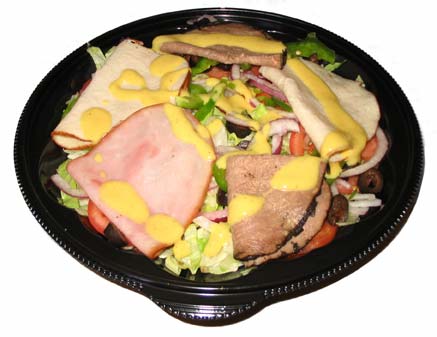 (Editorâ€™s Note: Welcome to Day Four of Salad Week here at The Impulsive Buy. Thank goodness the week is almost done, because my body has been acting strange with all of these vegetables. I actually had green poop yesterday. Anyway, hereâ€™s todayâ€™s review. Enjoy.)

Subway is known for making their sandwiches fresh, turning Jared Fogle into a celebrity, and giving adolescent boys another opportunity to snicker when they hear the words â€œfoot long.â€

They are also known for their Sandwich Artists, which we all know is just a nice term for â€œthe person behind the counter.â€ Armed with fresh baked bread, fresh ingredients, disposable gloves, a bread knife, and possibly, tender loving care, Sandwich Artists will create your sandwich they way you like it.

However, I wasnâ€™t in Subway for a sandwich, I was there for a salad.

However, the Subway Sandwich Artist apparently was also a Subway Salad Artist and instead of automatically putting in the ingredients listed on the website, she asked me what kind of vegetables I wanted. At first, I was surprised by this, but I eventually began to go down the list: Lettuce, tomatoes, onions, olives, etc.

The same vegetables they use in the sandwiches are the same ones used in the salad. Unfortunately, they didnâ€™t have baby spinach. As for the roast beef, turkey, and ham, the slices were just slapped on top of the vegetables.

After my Subway Salad Artist was done, I quickly realized I had just ordered a six-inch Subway sandwich without a bun, or â€œAtkins styleâ€ for you low-carb folks. Oh yeah, speaking of Atkins, I ended getting the Atkins Honey Mustard Dressing to put on top of my salad.

So basically, this salad was a six-inch Subway sandwich, without the bun, and it was the same price as a foot long sandwich. Heh, heh, heh…Foot long.

I felt ripped off.

Eating the salad made me feel even worse. There was way too much iceberg lettuce, which again, has even less nutritional value than David Blaine has magical powers. Also, the salad dressing had that typical Atkins taste, and I use the term â€œtasteâ€ loosely.

I think Iâ€™ll just stick to Subway sandwiches from now on.