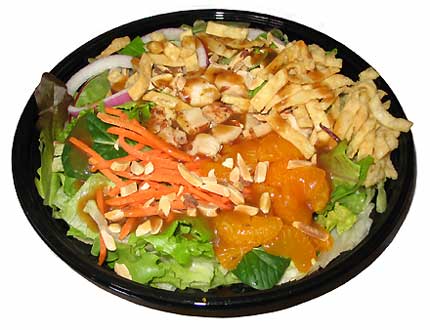 (Editorâ€™s Note: Itâ€™s the final day of Salad Week here at The Impulsive Buy. It was an interesting week filled drive-thru windows, black plastic bowls with clear plastic covers, way too much iceberg lettuce, and a lot of salad tossing. Todayâ€™s final salad review comes from my favorite fast food place, Jack in the Box. Enjoy.)

Being Asian, I felt I had to represent and try the Asian Chicken Salad from Jack in the Box. However, I also had another reason for picking it up: I needed more Asian in me and I was hoping that this salad could give it to me.

You see, my ethnicity is Japanese, but I am probably the most un-Japanese Japanese person in the world. I canâ€™t use chopsticks very well. I donâ€™t like sushi. I definitely donâ€™t karaoke. I remember six words from the two years of Japanese language I took in college (In case you were wondering, the six words are: Hai (yes), iie (no), sake (rice wine), sushi, karaoke, and geri (diarrhea).)

I donâ€™t even think I have enough Asian in me to make the pick up line, â€œDo you have Asian in you? Would you like some?â€ work for me.

Although, I do drive a Toyota, which kind of makes me more Asian. But then again, just because Carrie Underwood won American Idol, doesnâ€™t mean sheâ€™s very good, and also doesnâ€™t mean Ruben Studdard canâ€™t eat her.

After I mixed the salad in a bigger bowl, I took a few bites of it using a fork and then switched to chopsticks to see if I had gained the Asian powers to wield them properly.

When several mandarin orange slices and leafs of lettuce ended up on the carpet, I knew the art of using chopsticks wasnâ€™t meant to be. I guess my once fast fingersâ€™ past as â€œThe Human Vibratorsâ€ has messed up any chances of me using chopsticks properly.

The salad was very tasty, which was due to the very good Asian sesame dressing. I also liked the various textures the salad had. From the crunchiness of the wonton strips and almonds to the soft mandarin oranges and pieces of chicken. Itâ€™s probably the best fast food salad Iâ€™ve had so far, and Iâ€™m not being biased because Iâ€™m Asian.

Despite the 590 calories, 33 grams of fat, and 1306 milligrams of sodium, the Asian Chicken Salad is surprisingly the most healthiest specialty salad on the Jack in the Box menu. It also has a whole lot of potassium and dietary fiber, which are good for you.

After eating the entire salad, which was very filling, I realized that eating Asian foods wonâ€™t ever help make me more Asian.

Item: Jack in the Box Asian Chicken Salad
Purchase Price: $4.99
Rating: 4 out of 5
Pros: Tasty. Good dressing. Lots of potassium and dietary fiber. The healthiest speciality salad on the Jack in the Box menu. Filling salad. Salad Week is over, which means back to REALLY unhealthy stuff.
Cons: Didnâ€™t make me more Asian. High in sodium and fat. Abusing my fingers from those â€œHuman Vibratorâ€ years.

34 thoughts to “Jack in the Box Asian Chicken Salad”