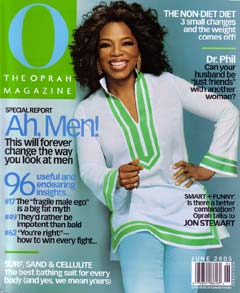 While in high school and college, I tried to learn about the opposite sex by reading my twin sisterâ€™s Seventeen, Cosmopolitan, and Marie Claire magazines.

I even took those silly quizzes. However, now that I think about it, all Iâ€™ve learned from those quizzes were; Iâ€™m a bitch and a skanky ho.

Despite reading womenâ€™s magazines, I still wasnâ€™t very good at impressing women in high school and college. However, looking back, the permed hair I had during those years mightâ€™ve been the reason why I wasnâ€™t successful with women.

Recently, I picked up the June 2005 issue of The Oprah Magazine, or â€œOâ€ for short, because there was an interview with Jon Stewart in it and I didnâ€™t like the quizzes offered in the other womenâ€™s magazines.

Do I really need to know how much of a flirt I am? Or, do I need to know if my man is cheating on me? I donâ€™t think so.

Anyway, the issue I picked up is apparently the â€œmenâ€™s issue,â€ with a lot of articles about men. However, I found out that itâ€™s strong enough for a man, but with the tampon ads, made for woman.

After reading the magazine, I didnâ€™t learn much about the opposite sex, but I did see some nice things to buy for a girlfriend, if I had one, and I also have a newly-discovered jealousy of womenâ€™s magazines.

Iâ€™m jealous because there are frickinâ€™ coupons in the magazine. Thereâ€™s a 3 Musketeers coupon, an All laundry detergent coupon, and TWO coupons for the McDonaldâ€™s Fruit & Walnut Salad.

All weâ€™ve got in menâ€™s magazines are women in bikinis and lingerie, sports cars, and cool gadgets. Those are all great things, but why canâ€™t we get some coupons too? I would totally dig some Burger King coupons or lap dance coupons.

Another cool thing about The Oprah Magazine is Oprah.

For a 51-year old woman, she is looking so fine. If Stedman wasnâ€™t in her life, Iâ€™d be totally trying to mack with her.

You might think Iâ€™d only mack with her because sheâ€™s got a lot of money, but no, that wouldnâ€™t be the case. Iâ€™d do it because I think sheâ€™s hot and maybe together we could have my wildest dream on her Wildest Dreams Bus.

Despite the interview with Jon Stewart, the coupons, and hot pictures of Oprah, there were a few things that bothered me about the magazine: The pictures of Dr. Phil.

Dr. Phil is a scary-looking and scary-sounding man. Just the sight of him makes my Oprah boner turn flaccid.