If I’ve learned anything in my life, it’s that I should never judge a book by its cover, never trust a big butt and a smile, never let a jury in California decide a celebrity murder or child molestation case, and never believe the food from fast food restaurants will look the way they do in their advertisements.

Here at The Impulsive Buy, I like to keep it real. I donâ€™t show you digitally enhance photos of beautifully well-crafted burgers that took hours to create. Instead I show you improperly color balanced photos of sloppily made burgers that took seconds to slap together by either a sixteen or seventy year old.

Now take a look below at the digitally enhanced photo of the new Jack in the Box Ciabatta Bacon â€˜nâ€™ Cheese, with its thick, perfectly shaped patties, two slices of cheese that are perfectly melted, three strips of red, juicy bacon that are the perfect length of the burger, colorful red onions and tomatoes layered perfectly on top of each other, green leaf lettuce with its perfectly placed beads of moisture, and a smothering of smoky cheddar mayo perfectly spread across the inside of the perfectly toasted Ciabatta bread.

I donâ€™t know about you, but that picture makes me want to pick one up, put on a black bikini, and wash a luxury car while eating it.

Now look at the improperly color balanced photo above of the Jack in the Box Ciabatta Bacon â€˜nâ€™ Cheese. It doesnâ€™t look very appetizing, does it? 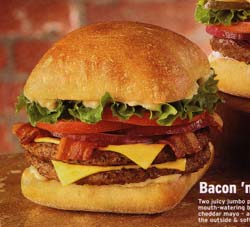 The two patties look like theyâ€™ve been molded together with the two slices of cheese. It looks like thereâ€™s only one slice of bacon. The red onions look like it came from parents who were having some interracial cross-pollination. The tomatoes look like theyâ€™re trying to run away from the rest of the burger.

Holy crap! The lettuce is ACTUALLY GREEN! The apocalypse is upon us!

Oh wait. The heat from the patties made the lettuce wilt. Everything is fine, itâ€™s not green anymore.

Anyway, despite looking like a 1980â€™s Cyndi Lauper hairdo gone bad, the Ciabatta Bacon â€˜nâ€™ Cheese was surprisingly really good. This tastiness was mostly due to the really good smokey cheddar mayo and the bacon.

Now that I think about it, the Ciabatta Bacon â€˜nâ€™ Cheese is sort like Dr. Ruth, on the outside she may not be the prettiest thing to look at, but on the inside, sheâ€™s a surprisingly crazy carnal animal that could rock my world.

40 thoughts to “Jack in the Box Ciabatta Bacon ‘n’ Cheese”