Whenever I purchase limited edition labeled foods, I always wonder to myself, “Will they be worth something in the future if I don’t open them?”

Ten years from now, who would want to buy a stale candy bar? The only people who would buy it would probably be Golden Palace.com, if it had an image of the Virgin Mary on the wrapper.

Also, who would want to eat a candy bar that’s over a decade old?

Why are you folks looking at me?

Okay. Okay. So I once chewed on several sticks of fourteen-year-old bubble gum that came from packs of 1981 Topps Football cards, while hoping to find a Joe Montana rookie card.

Hey, I didn’t get the Joe Montana rookie card. I needed some kind of consolation.

Anyway, I recently picked up FIVE limited edition candy bars from the national convenience store chain down the street and I thought this would be a great opportunity to have another product election, where you get to vote for what product I review next.

Here are the five limited edition candy bars you will be able to vote for: 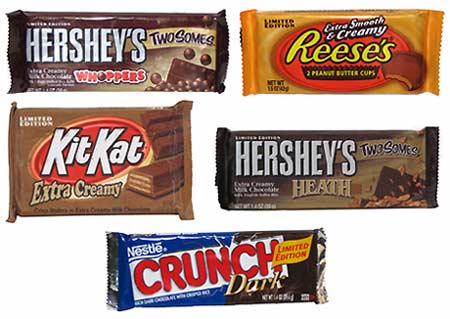 The candidate with the most votes will be declared the winner. The winner will be reviewed and the other candidates will be placed in a Ziploc bag, stored in the back of my refrigerator, and will be kept there until I’m ready to sell them on eBay…or until I get a craving for chocolate.

To vote, just leave a comment for this post with your choice. Only one choice and vote per person.

Iâ€™ll be accepting votes until Sunday, July 24th. Sometime shortly after that, Iâ€™ll post the review of the winning product.

Now go vote like you’re on a secluded island for some reality show and you want to get rid of the bitch/bastard who backstabbed you in one of the show’s challenges.

83 thoughts to “Which of the Five Will Stay Alive!!! (Limited Edition Candy Bar Edition)”