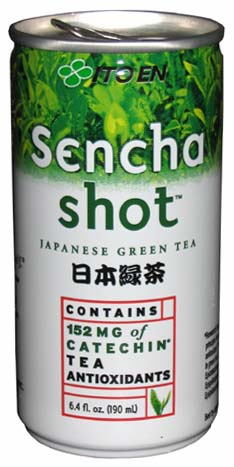 Over the years, I have found that many good things come in small packages, like chewing gum, marshmallows, my iPod, eggs, and Danny DeVito.

Unfortunately, I recently came across something that came in a small package, but wasn’t very good.

No, it wasn’t the movie Daddy Day Care for the Playstation Portable. It was the Ito En Sencha Shot.

In Japanese, “cha” means tea. As for “sen,” I don’t know what it means in Japanese off the top of my head, but to my friends with the munchies and glassy eyes, it means they’ll be twenty dollars poorer and maybe a little late to work.

(Warning: The link above may contain stuff that is NSFW.)

Anyway, the Sencha Shot is basically Japanese green tea in a can.

For those of you who aren’t familiar with green tea, it’s a wonderful source of antioxidants, which are used to get rid of harmful free radicals in our body.

According to the can, it contains 152 milligrams of catechin tea antioxidants.

Instead of a lot of long words I can’t spell or pronounce, I wish the Sencha Shot contained a lot of short words that I could pronounce and a decent flavor. It was cold and slightly bitter, just like the Japanese green tea that sat in my cup for hours because my blind date didn’t show up at the Japanese restaurant we were supposed meet at.

Fortunately, there wasn’t much Sencha Shot to drink, because the small can held only 6.4 ounces.

Surprisingly, the hardest thing about the Sencha Shot was not spelling bee championship-type names of the antioxidants, it was the can itself. I found out the hard way that the can was impossible to crush on my forehead, because it’s made out of steel.

The next day, I woke up with a red ring on my forehead and could no longer recall the lyrics of Gerardo’s “Rico Suave.”