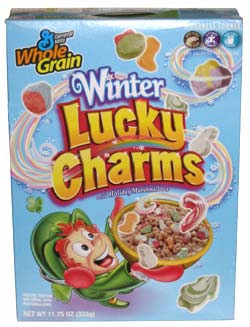 I don’t know what Lucky the Leprechaun has been smoking, but I do know that I don’t want any of it.

Anyway, the reason why I question Lucky the Leprechaun’s “extra-curricular” activities is because of the marshmallows in Winter Lucky Charms.

With regular Lucky Charms there are red balloons, blue moons, purple horseshoes, rainbows, pink hearts, etc, and they all look like what they’re supposed to represent.

However, with the marshmallows in Winter Lucky Charms, they look like Lucky the Leprechaun was either on an acid trip, in a dervish mood, or had something else on his mind, like a hot date, wondering whether his pot of gold was safe, or he needed to take a massive dump, but hates to use public restrooms.

Whatever it was, the marshmallows in Winter Lucky Charms don’t look so winter-ish. But they do look like other things (see chart below as reference – click pic for larger view). 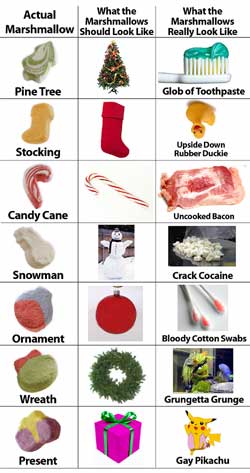 The “stocking” marshmallow is probably the worst of them all. First off, maybe I didn’t get the memo on this, but when did yellow become a “holiday” color. Also, I don’t know of anyone who has yellow stockings, except Big Bird. However, his entire wardrobe is yellow. To me, the yellow “stocking” looks more like an upside down rubber duckie.

The “ornament” marshmallows don’t really look like anything, but the closest thing I think they look like are bloody cotton swabs that someone might’ve gotten from sticking them a little to far into an orifice.

If the “wreath” marshmallow had a hole in the center of it, it might’ve looked like a wreath, but instead it looks like Oscar the Grouch’s girlfriend, Grungetta Grunge.

So not only is Lucky the Leprechaun a dope head, he’s also a cheap bastard.