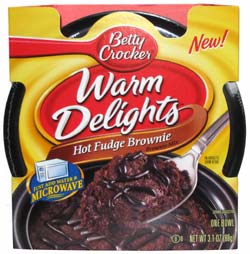 A couple of months ago, Impulsive Buy reader Muneer asked if I could review the Betty Crocker Hot Fudge Brownie Warm Delights. About a month later, I picked up a package, but did so with a lot of trepidation.

When I picked it up, it was about the same time that Impulsive Buy reader Ultimate Best Vamp Ever sent me an email asking me to review the Warm Delights. I told her I would, but didn’t tell her about my dark, deep secret, which prevented me from actually trying the Warm Delights.

Finally, this week, Impulsive Buy reader Jamie also asked me if I could review the Betty Crocker Warm Delights. With this many people asking for a review of the Warm Delights, I’ve decided to overcome my fears and let you know about one of my dark, deep secrets.

Oh wait, that was the wrong dark, deep secret.

Um…the actual dark, deep secret I wanted to tell is that I REALLY suck at baking.

Much like Trivial Pursuit, Connect Four, expressing myself emotionally with women, double dutch, shuffleboard, getting girlfriends to not break up with me using pathetic amounts of begging, and getting change back after sticking a twenty dollar bill under a stripper’s thong, baking is something I’m not very successful at…especially brownies.

I’m not talking about baking brownies from scratch, because I wouldn’t even dream of attempting that. I’m talking about from the easy-to-make brownie mix box. I have attempted to make brownies twice in my life and both times I failed miserably.

The first time I made brownies was in college, while playing Crash Bandicoot on the original Playstation. I added all the ingredients, except two eggs, which I kept out to make a “healthy” brownie.

About 30 minutes later, when I had to stick a toothpick into the brownies to see if they were done, the brownies broke the toothpick because the surface of the brownies was as hard as the pan they were in. It was so hard, I could’ve probably used it if I was in a tag-team wrestling match and wanted to knock out my opponent when the referee wasn’t looking.

The second time I made brownies, I added a little too much liquid and ended up with something that was less like brownies and more like chocolate cake.

So for years, I’ve stayed away from baking brownies, because I’d like the number of failed brownie baking attempts to be significantly less than the number of David Blaine “magic” television specials.

So it was with a lot of caution that I attempted to “bake” the single-serving Hot Fudge Brownie Warm Delights. On the packaging there were several “easy” steps, but not so easy for someone who not only sucks at baking brownies and pleading with women not to leave him, but also sucks at unit conversion.

After adding the brownie mix to the provided bowl, the instructions say to just add one tablespoon of water plus one teaspoon of water. Unfortunately, I only had a tablespoon spoon and I didn’t know which unit of measurement was larger. However, this problem was quickly solved thanks to our future overlords, Google.

When I pulled it out of the microwave, I had a decent-sized brownie that was about four inches in diameter and three-fourths of an inch thick. It definitely had more substance than Nicole Richie.

Included with the Warm Delights kit was a pack of fudge topping, which I drizzled on top (see picture above). I was surprised by how much topping there was to put on top of the brownie. It was enough to make people say, “Would you like some brownie with that fudge topping?”

After letting it sit for a while, I dug into it with a fork. Fortunately, the fork didn’t bend. With it still being a little warm, the brownie was a little bit on the cake-y side. So since I prefer my brownies to be chewy, I ate half of it and stuck the rest in the fridge, which really didn’t do much.

Overall, it was surprisingly good. The fudge topping added a lot of flavor to it, but if you’d like to make it a little better, you might want to think about adding some ice cream on it, chocolate chips in it, or going to your friend’s place that always smells like incense and getting some “special” ingredients to put in it that they grow hydroponically in their closet.

Item: Betty Crocker Hot Fudge Brownie Warm Delights
Purchase Price: $2.00 (on sale)
Rating: 8 out of 10
Pros: Tasty with the fudge topping. Lots of fudge topping. Takes less than five minutes to make. Convenient. Microwaveable. More substance than Nicole Richie. Trimmed pubic hair.
Cons: A little too cake-y for me. My abilities to make brownies from a boxed mix. David Blaine. My ability to express myself emotionally with women. My unit conversion skills.