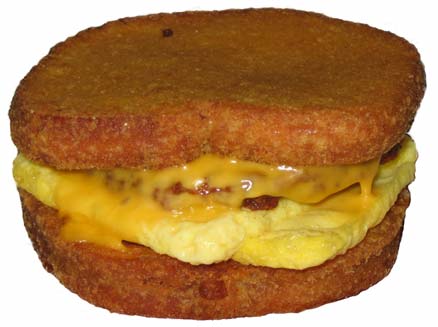 I have faults, like sometimes not using a plate to eat toast, not wearing underwear because I’m too lazy to do laundry, or always using the handicap restroom stall, even if all the other stalls are empty.

I have idiosyncrasies, like making smiley faces with my fingers on the fogged up doors in the frozen food section of the grocery store and putting stuffed animals in provocative positions whenever I’m in a toy store.

I also have fears.

Believe me, I have many fears. For example, spiders, mutant killer rabbits, Naomi Campbell holding a cell phone, the Whitney Houston’s song “I Will Always Love You,” women who wear jackets with huge shoulder pads, being in the audience of a hip-hop awards show, Scientologists, and rectal thermometers.

However, perhaps my biggest fear right now is waking up with The King. 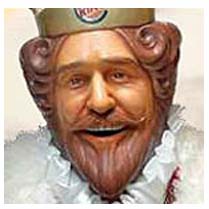 Not Elvis or B.B. King. I’m talking about this guy on the right.

Can you imagine waking up next to The King with that big smile on his face?

If I were to wake up with The King, the first thing that would pop up in my mind is, “Am I The Queen?” Then the next thing I would wonder is, “Why is The King smiling at me?”

So I am afraid of The King and I feel the only way to prevent me from waking up with The King is to eat breakfast at Burger King. It’s much like how I’ll try products to please the Advertising Gods, so that a product’s irritating commercial will go away.

(Note to self: Remember to pick up Ice Breakers Ice Cubes to help get rid of the Duff sisters Whoa! commercial.)

So recently I tried the new Burger King French Toast Sandwich, which consists of two slices of cinnamon and maple-flavored French Toast bread (which look like hash browns), one folded omelet egg, melted American cheese, and either bacon, ham, or sausage.

The concept is very similar to the popular McGriddles breakfast sandwich from McDonald’s, which uses pancakes instead of French toast. I decided to try the sausage one, since that is the one thing I am not hoping for if I wake up next to The King.

The first thing I noticed about the Burger King French Toast Sandwich was how small it was. It was about four inches in diameter. However, the same can be said about the McGriddles.

The French toast bun wasn’t fluffy like normal French toast, instead it seemed like they were deep fried. Heck, the eggs were fluffier than the French toast bun. As for the taste, I liked it very much. There was a nice combination of sweet and salty with every bite. Unfortunately, because of its size, there weren’t many bites.

So now that I’ve had my Burger King breakfast I hope I won’t be waking up with The King with that big smile on his face. If I do, I really hope he’s smiling because he either put a Sharpie pen mustache on my face or put my hand in warm water while I was asleep.

(Editor’s Note: Thanks to Impulsive Buy reader Sasha_Kitty for letting me know about the BK French Toast Sandwich.)

Item: Burger King French Toast Sandwich
Price: $2.89
Purchased at: Burger King
Rating: 3.5 out of 5
Pros: Tasty. Nice sweet and salty combination. Having a choice between sausage, ham, and bacon. Smiley faces on frozen food section doors.
Cons: Small in size. Waking up next to The King. Spiders, mutant killer rabbits, Naomi Campbell holding a cell phone, the Whitney Houston’s song “I Will Always Love You,” women who wear jackets with overly huge shoulder pads, being in the audience of a hip-hop awards show, Scientologists, and rectal thermometers.