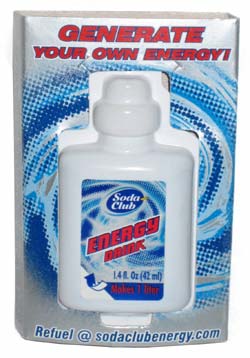 Growing up, I loved to make things like planes made out of Lego; dams in the backyard stream; slingshots with sticks and rubber bands; forts made out of pillows, boxes, and blankets; mixtapes with Huey Lewis and the News, Prince and Cyndi Lauper; and provocative poses using stuffed animals.

Over the years, my tastes have changed, but I still love to make things like decadent desserts; custom iTunes playlists with the Barenaked Ladies, Beyonce and the Beatles; paper mache masks of assassinated U.S. Presidents; blogs I occasionally update; hot and passionate whoopie; and Build-A-Bear.

Then I realized the third rule of Soda Club…taking famous lines from movies and adding your own twist to them to make you seem witty is just plain lame, especially if you’ve never seen the movie.

Anyway, I had the opportunity to make an energy drink thanks to the Soda Club Energy Drink Mix. The instructions to make a liter of it was illiterately simple due to the drawings on the back of the packaging.

It was definitely easier than a simple sudoku or removing a bra using only my teeth, but not as easy as figuring out Lance Bass was gay. As you can see from the picture on the left, the Soda Club Energy Drink looks like beer. For something that was low sugar and low calorie, I was surprised by how decent it tasted. It’s definitely not the best energy drink I’ve tasted, but it’s definitely not the worst either. It also gave me a good boost of energy, but I guess that should happen after drinking the entire one liter bottle within 30 minutes.

The greatest appeal of the Soda Club Energy Drink Mix is the fact that is can be significantly cheaper to make your own energy drink using this mix rather than spending $1 to $2 for either a 8- or 16-ounce can of energy drinks like Red Bull, Monster, and Rockstar.

With its decent taste, decent energy boost, and inexpensive price, the Soda Club Energy Drink Mix may come in handy during those nights I’m making either a decadent dessert or wet and sticky whoopie.

(Editor’s Note: Thanks to Emily, an intern at Soda Club, for the free samples of Soda Club Energy Drink. Actually, she sent these to me months ago, so she might not be an intern anymore. It was so long ago that she might’ve graduated from college, moved on in the world, and is right now making her way up the corporate ladder. Or she might’ve moved to the Caribbean to enjoy the warm beaches…and occasional hurricanes. Anyway, thanks again, Emily! For more reviews of the Soda Club Energy Drink Mix, visit here and here.)

Item: Soda Club Energy Drink Mix
Price: FREE
Purchased at: Given by Emily, a Soda Club intern.
Rating: 3 out of 5
Pros: Despite being low-sugar and low calorie, it has a decent taste. Decent energy. Inexpensive compared with mainstream energy drinks. Easy to make. Looks like beer. Lots of B Vitamins. Some Vitamin C. Barenaked Ladies.
Cons: Missing the good energy stuff, like taurine and guarana, ginseng, and other things I have a hard time pronouncing. Opening bottles of soda after shaking it. Pimps trying to get money from their hos.