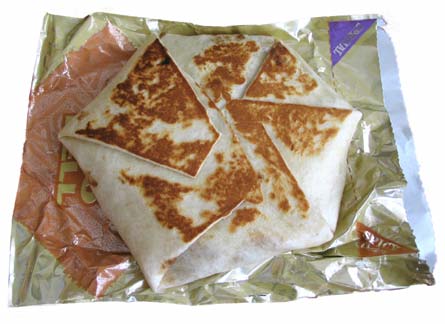 Unfortunately, Taco Bell did mess with the classic Crunchwrap Supreme and created the Spicy Chicken Crunchwrap Supreme, which contains spicy shredded chicken, sour cream, lettuce and tomatoes, a tostada shell, and nacho cheese sauce all wrapped up in a grilled flour tortilla.

It sounds good, but in reality it’s like if George Lucas did the following things to the original Star Wars trilogy:

1. Had a hairless Chewbacca that mooed
2. Lando Calrissian always had a Colt 45 in his hand
3. Princess Leia’s gold bikini in Return of the Jedi was instead a gold Victorian dress
4. Made Greedo shoot first at Han Solo in the cantina scene

In other words, the Taco Bell Spicy Chicken Crunchwrap Supreme just wasn’t right and doesn’t come close to being as good as the original.

It’s like Taco Bell took Metallica’s The Black Album cut off all of its long hair, turned the devil horns hand sign into the letter “I” in sign language, and added a cover of Reel Big Fish’s cover of a-ha’s Take On Me as a bonus track.

Basically, the only thing different between the original Crunchwrap Supreme and the Spicy Chicken Crunchwrap Supreme is the instead of ground beef, it’s got the shredded spicy chicken. But unfortunately, that seemingly minor tweak turned out to be something as dramatic as replacing the picture of normal, jheri curl, plastic surgery-less Michael Jackson on the cover of his Thriller album with a picture of a scary, pale, nostril-less women, like Michael Jackson.

If the shredded spicy chicken was actually spicy, it might’ve been much better. Sure, adding Taco Bell’s Fire sauce would’ve turned up the heat, but doing so wouldn’t have made it — as Taco Bell likes to say — good to go, because it’s hard to put taco sauce on something while driving, playing World of Warcraft, or playing air guitar to Metallica’s album Master of Puppets.

Item: Taco Bell Spicy Chicken Crunchwrap Supreme
Price: $2.89
Purchased at: Taco Bell
Rating: 4 out of 10
Pros: Stays warm in thermal pouch thingy, instead of heat-escaping box. 4 grams of farty dietary fiber. 18 grams of muscle building protein. The Black Album and any Metallica albums before it.
Cons: Not as good as original Crunchwrap Supreme. Not very spicy. The music at the Taco Bell website. 3.5 grams of trans fat. 1,300 milligrams of sodium. Any Metallica album after The Black Album.