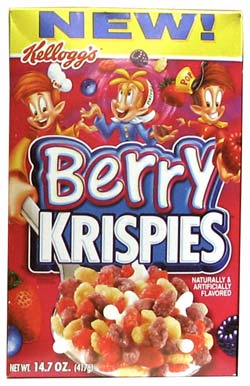 “Suri Cruise is the reincarnation of Xenu and will rule over the Galactic Confederacy. That’s why no one has seen her.”

Every time I eat a bowl of these Berry Krispies, I hear strange things besides the usual snap, crackle, and pop. At first, I thought it was kind of cool with the Berry Krispies saying things like, “Oooh, Eva Longoria…I’d like to tap dat ass,” or the Yakov Smirnoff joke, “We have no gay people in Russia — there are homosexuals but they are not allowed to be gay about it. The punishment is seven years locked in prison with other men and there is a three year waiting list for that.”

However, it’s been six bowls and all that Berry Krispies talking has just gotten plain irritating, because it’s beginning to say things I don’t want to hear or things that just don’t make any sense, like “You will never get laid, unless you pay for it” and “One day, cars will be fueled by karma and Larry the Cable Guy will be ruler of a country he will purchase and will name LarryLand.”

All this talking wouldn’t be so bad if I could have a meaningful conversation with the Berry Krispies. We could talk about the meaning of life, our goals and dreams, why the Detroit Tigers don’t suck this year, or why I haven’t gone out on a date in a year and a half.

Unfortunately, the Berry Krispies seem to have a mouth of its own and ignores me, which makes me feel like I’m Debbie Matenopoulos when she was on The View.

The chatter also wouldn’t be bad if the Berry Krispies were actually tasty. They have a strong berry smell, but unfortunately it doesn’t translate into a strong berry taste. However, if you don’t like your cereals too sweet, then this maybe the cereal for you.

Even the colors of the Berry Krispies didn’t compare with the colors of Fruity Pebbles and Froot Loops, which are more vivid and possibly what unicorn poop looks like.

Oh man, that last line sounds like something Berry Krispies would say.

“Unicorn poop has magical powers that can cure any disease or get you a date.”

(Editor’s Note: For those of you who are readers of the neglected Cereal Mashup, I just want to let you know that it is neglected no more. I just posted a new cereal mashup review and I’ve got 14 boxes of cereal sitting in my kitchen waiting to be mashed up.)

Item: Berry Krispies
Price: $3.50 (on sale)
Purchased at: Safeway
Rating: 2 out of 5
Pros: Snap, crackle, and pop. Good for those who don’t like really sweet cereals. Yakov Smirnoff.
Cons: Can’t have a meaningful conversation with Berry Krispies. Says some weird things. Colors aren’t as vivid as Froot Loops or Fruity Pebbles. Not as good as Fruity Pebbles. Gets soggy really quickly. Being Fred and Barney’s bitches. The whereabouts of Suri Cruise.