Cheerios are enjoyed by so many people and I think the reason why Cheerios are beloved is because there are so many varieties. Just like 24-hour news networks, reality shows, and crazy publicly drunk celebrities to hate, there’s a type of Cheerios for everyone. 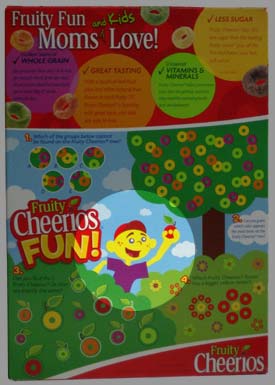 Despite the numerous groups of people who like Cheerios, there has been a small minority group that has been ignored by Cheerios…zombies. That’s right, the living dead hasn’t liked any of the previous incarnations of Cheerios, but thanks to the new Fruity Cheerios it appears there’s a Cheerios out there that appeals to zombies.

No wonder zombies went around killing people and eating their brains and raw flesh. They didn’t have a Cheerios to call their own.

Who knew that Fruity Cheerios would have the power to turn a bloodthirsty zombie into a happy, smiling zombie? But then again, after trying Fruity Cheerios, I can kind of understand why zombies are happy. It’s not as sweet as Fruity Pebbles or Froot Loops, but Fruity Cheerios is pretty good, thanks to the fact that it’s flavored with real fruit juice.

The colors of Fruity Cheerios were pleasant and bright, and powerful enough to turn the cold, empty heart of a zombie into a heart filled with love, compassion, and twelve essential vitamins and minerals.

I hope they don’t get rid of Fruity Cheerios, because I’m not going to be the one to explain it to the zombies.

(Editor’s Note: Thanks to Tony, Meredith, and all the people who suggested I try Fruity Cheerios. Now I’m going to go kill some zombies with fire so they don’t eat all the Fruity Cheerios.)