(Editor’s Note: Thanks to all the readers who participated in yesterday’s Vote To Torture Me Election. The results were very surprising and in a landslide vote, you readers chose to save my ears and save my soul. So I won’t be reviewing K-Fed’s attempt to take over Vanilla Ice’s reign as the biggest rap poser/wannabe ever. Thank you.)

The Shopping Cart takes a quick look at things that I’ve bought, but am too lazy to write a full review for. 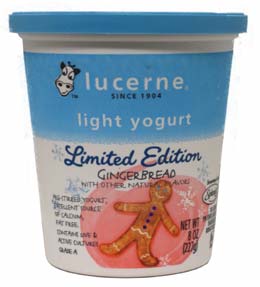 At the slow rate of deliciousness these Lucerne Limited Edition Yogurts are going, I believe in 2010, they will be so delicious that little old ladies will either steal them from your shopping cart, violently fart in the yogurt section to prevent you from getting close to it, or assault you with their walkers at Safeway for them.

But right now they suck.

The other week I tried the Lucerne Limited Edition Chai Latte Light Yogurt and it made me gag hard. Although not as much as I did watching the video of Anna Nicole Smith giving birth via C-section on YouTube (Warning NSFW and NSFTWHMGW*).

It was decent enough for me to be able to finish an entire cup of it, which I couldn’t even come close to doing with the previous limited edition flavor. But I would not eat another one unless someone forced me to choose between eating another Lucerne Limited Edition Gingerbread Light Yogurt or watching the Anna Nicole Smith C-section video.

*Not Safe For Those Who Hate Money Grubbing Whores