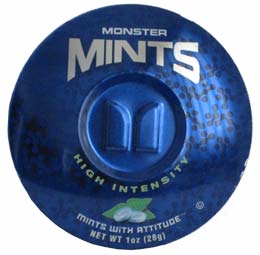 On behalf of all the monsters out there, I just want to thank Monster for finally making a mint specifically made for monsters. I’m sure all monsters, whether they be zombies, gargoyles, werewolves, vampires, Frankenstein, Cookie Monster, or supermodel Naomi Campbell, are finally happy to have a mint that we can call our own.

Oh, you didn’t know I was a monster?

I thought the hairy arms, hairy legs, and fangs gave me away, but I guess you thought I’m just a really hairy Asian guy.

In reality, I’m a werewolf. Don’t worry, I don’t go around mauling people…just homeless ones and those who come to my door to sell me something. I’d show you a video I have of me walking around topless, but you would probably think that you’re either watching a National Geographic special or the Kitty Scratching Post Channel.

Also, the movie Teen Wolf starring Michael J. Fox, is loosely based about my life in high school, and no, I did not receive any royalties.

Each of the roughly dime-sized minty High Intensity Monster Mints are just as curiously strong as any of the Altoids mints I’ve had and their texture is smooth, unlike the chalky Altoids. That minty breath freshening goodness is perfect to help cover up bad breath after we monsters eat things like onions, human flesh, peanut butter, human blood, and garlic…oh wait, in the vampires case, definitely not garlic.

The sugar-free Monster Mints come in two flavors, the cinnamon-flavored Intensely Spicy and minty High Intensity, which don’t really sound like flavors at all, more like settings for a 25 cent vibrating bed in a sleazy motel room you can rent by the hour.

Despite its ability to help mask the dreaded blood breath, there’s a major problem with the High Intensity Monster Mints…its price.

At the Neiman-Marcus-like price of $5.99 per can for about fifty mints, I thought they would do something more than freshen my breath, like turn me into a normal human being or bring peace among monsters and human so that we may no longer need to fear torch-wielding mobs or silver bullets, both of which are truly the dreams of all monsters.

We monsters don’t want to hurt. We just want to be loved.

The High Intensity Monster Mints are about twice the price as other comparable mints and definitely out of the price range for those monsters whose jobs are to either terrorize villagers, eat the brains of living humans, suck the blood out of unsuspecting victims, or abuse assistants, because those don’t pay very well.

Cookie Monster is probably the only monster who can afford it, but as all monsters know, he’s a fuckin’ sellout. He wouldn’t be making the bank he’s making now if he continued to be what he originally was, the Cooking Monster, a master human flesh chef who was train in the culinary arts at the finest schools and was known for killing his own fresh ingredients.

Cookie Monster is like Larry the Cable Guy, they’re both fake. Cookie Monster may seem to have a limited vocabulary that consists of just “Me want cookie,” but he actually can speak FIVE languages, including Latin.

Who the fuck speaks Latin anymore?

Anyway, the High Intensity Monster Mints maybe strong enough for a monster, but made for those monsters with monster wallets.