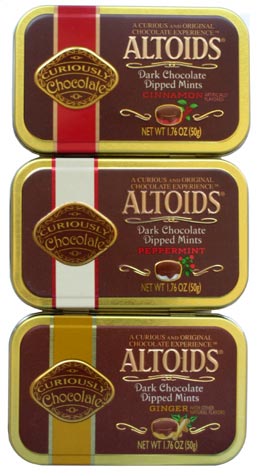 Your curiously strong powers have thwarted my plans for world domination time and time again. How can I continue to scare away pretty women, make babies cry and make salespeople regret approaching me with you constantly freshening my breath with your curiously strong minty powers?

I have attempted to increase my super stench powers to match your powers by not brushing my teeth, not flossing, not showering, not using deodorant, not changing my socks, and even not wiping, but my power-increasing experiments on myself have proved too much for even my dull nose to handle.

But recently, I have come across a compound that has the ability to weaken your curiously strong minty powers and turn you into a mere mint, like your weakling friends Tic Tacs and Certs. It is the kryptonite that will bring your doom, as well as the world’s. Muahaha. Muahaha.

This compound is dark chocolate.

Don’t you find it ironic that dark chocolate with its healthy flavonoid antioxidants also has the ability to cause harm to your curiously strong super powers, Altoids? Muahaha. Muahaha.

Don’t you also find it interesting that the word “dark” is in dark chocolate? Because when you’re defeated, the world will be a dark place when I rule it with my bad breath. Muahaha. Muahaha.

Oh, I can imagine it now. I can eat onions, garlic and a variety of fermented foods and go up to a person and talk to them using a lot of words with the letter “o” in them and verbally stress every single one: OOOOH, DOOOO YOOOOU KNOOOOW, HOOOOW TOOOO GOOOO TOOOO TOOOOLEDOOOO OOOOHIOOOO?

I could harm hundreds of people with that phrase alone.

Not even your curiously strong Super Friends, Cinnamon Altoids and Ginger Altoids, can stop me from polluting the air with my bad breath and making it very uncomfortable to sit next to me on a crowded bus or in coach class on an airplane. Muahaha. Muahaha.

So try and stop me, Peppermint Altoids.

Oh, you’re facing me head on with Cinnamon Altoids and Ginger Altoids? You’ve got balls, Peppermint Altoids, just like your Peanuts cartoon strip character namesake Peppermint Patty has. But I’ve got dark chocolate and I’m going to use it to weaken all of your curiously strong powers.

So how does it feel to be covered it dark chocolate in my mouth, my breath-freshening friends? Is it dark? It must be…dark. Oh, the dark chocolate is so delicious in so many ways, especially on you, Peppermint Altoids and Cinnamon Altoids. Muahaha. Muahaha.

W-w-what is going on? The dark chocolate is melting in my mouth.

Your curiously strong minty, cinnamony, and gingery powers have broken through my layer of dark chocolate, freshening my breath and making me powerless and non-pungent. Actually, except the Ginger Altoids, you’re kind of gross. I must flee!

You may have won this battle, Altoids. But you will not win the war. I’ll be back, and when I do, mark my words, you will regret it and smell it. Muahaha. Muahaha.

(Editor’s Note: Thanks to Marc at Hunter PR who sent samples to me a few weeks ago. Also, for more Altoids Dark Chocolate Dipped Mints reviews, go visit Candyblog and Candy Addict.)

Item: Altoids Dark Chocolate Dipped Mints
Price: FREE
Purchased at: Received free from Marc at Hunter PR
Rating: 8 out of 10
Pros: Dark chocolate is good for you. Cinnamon and Peppermint versions were good. Once the chocolate melts away, Altoids can save the day with their curiously strong powers from bad breath bad guys.
Cons: Dark chocolate is temporarily bad for Altoids’ curiously strong minty powers. Chocolate melts away too fast. Ginger Altoids was my least favorite. Tic Tacs and Certs are weaklings. My thwarted plans for world domination. My breath without Altoids.