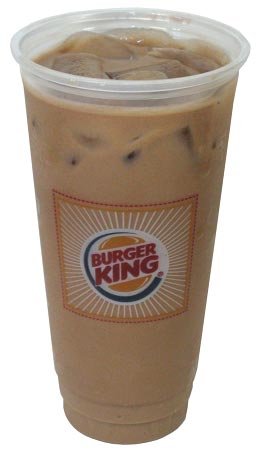 I’m frickin’ tired of The King sneaking up on me.

Doesn’t he have anything better to do? He’s a king. Shouldn’t he be running a kingdom, causing oppression somewhere, or at least being a powerless figurehead? If I had a nickel for every time The King snuck up on me and offered something from the Burger King menu, I would be rich enough to buy a Big Mac.

It was really creepy at first having him randomly appear, but then it was nice having food delivered me and not having to worry about buying groceries. For breakfast, lunch, and dinner he’d just sneak up on me and present me with some form of BK sustenance. The King also knows when to show up for those times other than meals. For example, when I’m at work, I’ll walk out of my office intending to get something from the snack machine, but he’ll just pop out from around the corner and offer me something small like onion rings or a Whopper Jr.

There was this time when I was yawning at my desk and needed some caffeine. Then out of nowhere The King appeared with a Mocha BK JOE Iced Coffee. It’s basically coffee with chocolate syrup squirted in and poured over ice. The slightly creamy drink initially had a strong chocolate taste and then was followed by a weak coffee aftertaste that was probably weak because of the overpowering chocolate. With all that chocolate, it was good, but also a little too sweet for me.

But did it give me a boost of energy? Well, anything with 63 grams of sugar in it probably would.

There have also been times when he brought me food at inappropriate moments, like a Tendercrisp Chicken Sandwich while reading about Bird Flu in Taiwan and a Burger King Kids Meal while watching Dateline NBC’s To Catch A Predator.

After a few weeks, I got tired of eating Burger King and I gained ten pounds, but The King kept sneaking up on me. I asked him if he could bring me something a lot more healthier, but all he did was bring me a Whopper without mayonnaise. Eventually, I went grocery shopping so I could make my own healthy meals instead of eating Burger King food. Then whenever The King appeared and offered food, I’d tell him I already have something to eat. He would then drop his head in disappointment and walk away, but he’d still be smiling. 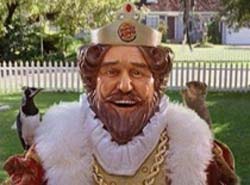 After several days of rejecting food from The King, things got really creepy.

One time when I woke up, he was frickin’ naked and standing over me. Let me tell you, it wasn’t fun looking at his little prince and two royal guards. That’s not the very first thing I want to see in the morning. Also, I just want to let you know that not only is his face plastic looking, so is everything else.

This other time, I woke up and caught him looking through my clothes hamper and sniffing my boxers. When he saw me awake, he tried to distract me by shoving a Croissan’wich in my face, while sticking a few worn boxers in his pocket. I don’t think that’s a smile of happiness he has on permanently, it’s a smile of guilt.

And I’m not even going to go into detail about the time he introduced me to what I thought was the new BK hot dog.

I’m not too sure what I’m going to do about The King, but he still sneaks up on me and attempts to serve me Burger King food. Maybe it’s about time I serve him a restraining order.

Item: Mocha BK JOE Iced Coffee
Price: $2.09 (22 ounces)
Purchased at: Burger King (or BK for you cool folks)
Rating: 3 out of 5
Pros: Good. Chocolate syrup. Cold. Refreshing. The 63 grams of sugar it contains gave me a quick energy boost.
Cons: Not too much of a coffee flavor. A little too sweet. Having The King sneak up on you. Having The King wake up next to you naked. Having The King sniff your used underwear. Basically, The King is a total perv. The King’s permanent smile.