If you want to see what kind of terrain the Curiosity Rover on Mars is experiencing, you could visit the NASA Mars Science Laboratory website or you could just stare at the picture above of Burger King’s Popcorn Chicken because they look like rocks that have been sitting on Mars’ surface for thousands of years.

If you used the Curiosity Rover’s Alpha Particle X-ray Spectrometer, or visited the Burger King website, you’d discover the Popcorn Chicken’s composition is white meat chicken breast and seasoned breading. When I purchased a medium-size serving, I got many pieces that had very little or no chicken at all.

The large pieces that did have a decent amount of chicken in them had dry meat and had me thanking the Roman god of war, Mars, for the two dipping sauce containers that came with my order. Speaking of dipping sauce, there are eight from which you can choose from. There’s King Kung Pao, BBQ Roasted Jalapeño, Barbecue, Honey Mustard, Sweet and Sour, Ranch, Buffalo, and Zesty. I went with Honey Mustard.

The breading was dry and depressing. It was supposed to be seasoned, but my Papillary Gustatory Receptors couldn’t detect much seasoning besides salt. Instead, I mostly tasted the flour in the breading. It also didn’t have a satisfying crunch, instead it was like a crumbling muted crunch. If the Curiosity Rover had a Despondency Detecting Moisture Discharger, it would use it to cry about the dry breading…and to, perhaps, give it some moisture.

As you can tell, my first experience with BK’s Popcorn Chicken was Spirit-Rover-stuck-in-the-soil disappointing, so I decided to order it again, but from a different Burger King location. 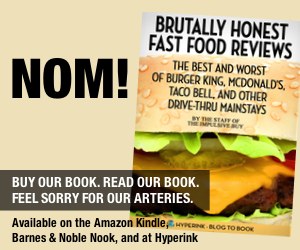 My second serving of BK’s Popcorn Chicken was much better and I thought they were as good as McDonald’s Chicken McBites. The chicken was still dry, but not as much. The breading had a better crunch and my Papillary Gustatory Receptors could taste the seasoning in it, which was slightly peppery. They’re flavorful enough that I could eat them without any dipping sauce. By the way, I went with Honey Mustard again because I like mustard and the word “honey” has been stuck in my head thanks to Honey Boo Boo.

I have to say I really like what Burger King has been doing with their menu every few months. Instead of introducing one or two new products, they’ve released a slew of new items at one time. In June, they rolled out a summer BBQ menu with BBQ pulled pork sandwiches, two new BBQ Whoppers, sweet potato fries, two new BBQ chicken sandwiches, and a bacon sundae. And now they have this premium chicken menu with Popcorn Chicken, Chicken Parmesan Sandwich, Italian Basil Chicken Sandwich, three chicken salad wraps, and an Italian Basil Chicken Wrap.