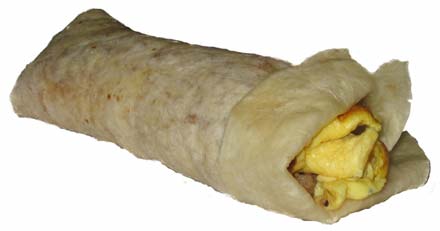 Just like certain health clubs and establishments with 50 cent peepshow booths, one of the great things about Jack in the Box is the fact that itâ€™s open 24 hours a day. Even better is the fact that I can order anything from their breakfast menu at any time of day.

I wouldnâ€™t be surprised if Jack in the Box is where all the guys coming out of the establishments with 50 cent peepshow booths go, because Jack in the Box would be the ideal place to go to after jackinâ€™ the cock.

Anyway, after coming out of an establishment with 50 cent peepshow booths at two in the morning, I had an urge for a milkshake, so I headed to the nearest Jack in the Box. While looking at the drive-thruâ€™s menu I noticed the new Jack in the Box Meaty Breakfast Burrito. I instantly knew I had to have one with my Oreo milkshake.

When I got to the drive-thru window all I had was quarters. Lots and lots of quarters. Fortunately, fast food is even more convenient since most fast food places now accept credit cards. So I whipped my credit card out and paid for my post-peepshow meal.

Stuffed in the flour tortilla of the Meaty Breakfast Burrito was ham, little balls of sausage, bacon, scrambled eggs, cheddar cheese, and pepperjack cheese. It also came with a small container of salsa, which looked more like marinara sauce than salsa.

Despite all of that stuffing, the Meaty Breakfast Burrito was kind of small. I was hoping for something the size of a bean burrito from Taco Bell, but it was only slightly bigger than a regular soft taco.

Another thing I noticed about it was its burrito form could make it easy to eat while driving to work. Although when I ate it on my couch, somehow the little balls of sausage ended up on my lap.

Overall, it was meatastic, eggcellent and cheesealicious. Or in other words, it was just as good as the Burger King Enormous Omelet Sandwich.

As for the salsa, it didnâ€™t add much to the taste, plus Jack in the Box was pretty stingy with the amount given. I ran out of salsa halfway through the Meaty Breakfast Burrito.

Because the Jack in the Box Meaty Breakfast Burrito is smaller than the Enormous Omelet Sandwich, itâ€™s a bit healthier.

Although, the 490 calories, 29 grams of fat, 345 milligrams of cholesterol, and 1,310 milligrams of sodium are still enough to possibly make your heart want to seek revenge the next time youâ€™re in need of blood for an erection, like when youâ€™re in a 50 cent peepshow booth.

23 thoughts to “Jack in the Box Meaty Breakfast Burrito”