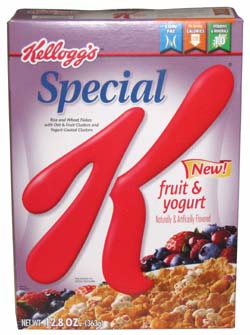 Growing up, I never ate Special K because the television ads made me think the only people who ate Special K were skinny beautiful women in white one-piece bathing suits.

At that time, I wasn’t skinny, beautiful, a woman, or owned a white one-piece bathing suit. Instead, I was husky, homely, a little boy, and owned a whole bunch of horizontally striped collared shirts that made me look even more husky. So I felt I wasn’t special enough to eat Special K.

However, today I’m slightly overweight, apparently kind of cute, a man, and once walked around my dorm wearing some girl’s bra for a dollar.

Despite the progress I’ve made, I still don’t think I’m quite special enough to eat Special K.

Another reason why I never ate Special K was because it didn’t seem like there was anything “special” about it.

No rainbow of colors.

No two scoops of raisins.

No toy inside the box.

No athletes on the front of the box.

No super difficult word find puzzles on the back of the box.

Unless Kellogg’s decided to use psychology on all of us to make us think that Special K is “special,” but in reality the only thing “special” about Special K is the fact that there’s nothing special about it.

Oh man, my brain hurts. That took too much thought.

Thank goodness I’ve never had to eat Special K, but I’m glad I got to eat Special K Fruit & Yogurt because it’s actually pretty good with its oat & fruit clusters and yogurt-coated clusters mixed with rice and wheat flakes.

The berry-flavored oats give the cereal a nice taste and crunch, which is good because the flakes get soggy pretty quickly. Also, despite looking like something that a drunk college kid might throw up, the yogurt-coated clusters also added a different flavor and texture to the cereal.