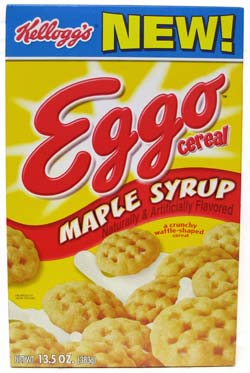 Update: This cereal was brought back in 2019. Click here to read our review of the 2019 version.

Maple syrup is great for pancakes, French toast, and embarrassing your family name for participating in a maple syrup chugging contest

They are also great on waffles, especially frozen waffles. Actually they’re even better on burnt frozen waffles that were in the toaster for too long because a certain someone was distracted by a Girls Gone Wild DVD commercial on television.

Did you know the Canadian province of Quebec is the world’s largest producer of maple syrup?

Did you know that written things in Canada have to come in both English AND French?

Did you know there’s a Girls Gone Wild Canada?

Many of the pancake syrups you see on your store shelves contain little or no maple syrup at all. So it didn’t surprise me that the new maple syrup-flavored Eggo Cereal didn’t contain any maple syrup.

The only syrup it contained was high fructose corn syrup, which disappointed me like those black censored bars used in the Girls Gone Wild commercials.

Eggo Cereal was supposed to taste like waffles with maple syrup and it sort of did. However, it tasted more like a less-sweet Cap’n Crunch with a strong fake maple syrup scent. Since I’m a fan of Cap’n Crunch, I liked the taste of it.

So with the Eggo Cereal you get the goodness of Cap’n Crunch without the shredded upper palate. It’s like with a Girls Gone Wild DVD, you get the flashing goodness that happens during a New Orleans Mardi Gras on Bourbon Street without the need for beads.