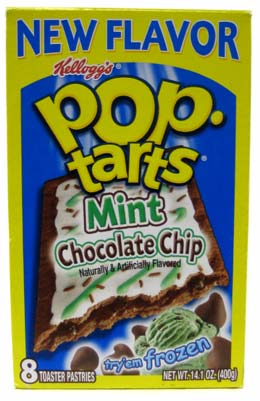 (Editor’s Note: Today’s review contains links that are either Not Safe For Work (NSFW), Not Safe For Children (NSFC), or Not Safe If You Don’t Want To Have An Erection At Work (NSIYDWTHAEAW). Please click with caution. Thank you.)

Did you know that every time a bell rings, an angel gets its wings?

Didn’t know that either?

Well, did you know that every time Kellogg’s releases a new Pop-Tarts flavor, a new celebrity sex tape gets posted on the internet?

Well recently Pop-Tarts introduced a new Mint Chocolate Chip flavor and recently TWO celebrity sex tapes have surfaced, a sex tape with Dustin Diamond, who played Screech from the TV show Saved by the Bell and another one involving Tickle Me Extreme Elmo.

Just like in a celebrity sex tape, when the Mint Chocolate Chip Pop-Tarts get toasted and warm, things get gooey, but that doesn’t necessarily make it a good thing. Good things also happen in a celebrity sex tape when certain things are frozen stiff and the same can be said about the Mint Chocolate Chip Pop-Tarts. I personally think they’re better hard and stiff than warm and gooey. As for its taste, it was as minty as a Girl Scouts Thin Mint, but not as good.

Now I did hours of research, looking back at correlations between new Pop-Tarts flavors and celebrity sex tapes. Of course, most of that time was spent re-watching some of the celebrity sex tapes over and over again, and sometimes playing them in slow motion, frame by frame.

Through those hours of research and a box of Kleenex, I learned celebrities don’t use condoms, people actually consider Tonya Harding a celebrity, Colin Farrell still looks like an asshole naked, I should never stand at the urinal next to Tommy Lee unless I want to feel inadequate, and I found more instances of celebrity sex tapes and new Pop-Tarts flavors being released at the same time.

In 2005, when Strawberry Milkshake Pop-Tarts were beginning to pop out of toasters, a sex tape with Colin Farrell and a former Playboy Playmate popped up its head, along with the heads of many others.