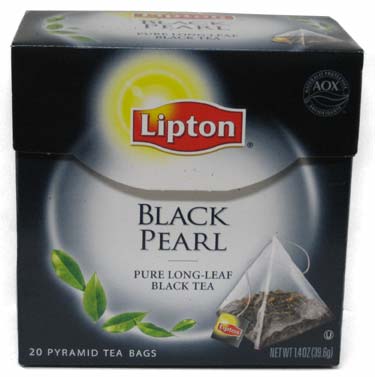 Who knew pyramids were the perfect vessels for dried up, shriveled things, like the mummies of Egyptian pharaohs, Betty White’s game show career as a regular guest on $25,000 Pyramid, and the tea in the new Lipton Black Pearl Pyramid Teas.

According to the Lipton website, the pyramid shape of the mesh bag allows it to have enough room for the hot water to infuse with the tea, better extracting its rich color and flavor, which sort of takes a page from the thermodynamics of underwear, “Restriction of air flow creates a funky smell you know.”

The instructions for the Lipton Black Pearl Pyramid Tea bags are as simple as any other bagged teas. Just pour hot water over it and steep for about three minutes.

You know what? I donâ€™t think I like the word â€œsteepâ€ in this context, since the word could also have a totally different meaning like, “There’s a steep cliff there where we can dump the body.” I think I’ll create another term for this action.

Oh, I got it. Letâ€™s call it teabagging.

I don’t know about you, but to me, teabagging is quite therapeutic. There’s something kind of nice about dipping my tea bag into the mouth of a mug. The warm steam coming up from the mug’s mouth, I think, would feel pretty good on my tea bag.

There are also several ways of teabagging. I could dip my tea bag in and out of the mouth of a mug or I could just leave it in the mug’s mouth until my tea bag is ready to come out. Both ways are equally satisfying. I also enjoy watching drops of liquid fall off the end of my tea bag and back into the mug’s mouth.

Anyway, the Lipton Black Pearl Pyramid Tea is made from premium orange pekoe and pekoe cut black tea. Despite its name, the orange pekoe does not give the tea an orange flavor. It’s sort of like how Kevin Federline calling himself a rap artist doesn’t make him a rap artist, since no one else calls him one.

The Lipton Black Pearl Pyramid Tea has a nice black tea flavor, which isn’t very bitter like regular Lipton tea, but it’s kind of plain and boring like all Tim Allen movies and probably could’ve used a little fruit infusion much like the other flavors in the Lipton Pyramid Tea line have. It also does make a nice refreshing iced tea when some ice cubes and sugar are added.

Now if you’ll excuse me, I’ve got some serious teabagging to do.

(Editorâ€™s Note: Thanks to long time Impulsive Buy reader Muneer for letting me know about the Lipton Pyramid Teas.)

Item: Lipton Black Pearl Pyramid Tea
Price: $5.69
Purchased at: Safeway
Rating: 3 out of 5
Pros: Tasty tea. 140 milligrams of antioxidants. 20 pyramid bags per box. Makes a good iced tea. Teabagging. Betty White in Golden Girls.
Cons: Kind of plain, could’ve used a little fruit infusion. Extremely pricey here on this rock in the middle of the Pacific Ocean. I know it’s a given, but I have to put Kevin Federline and Tim Allen movies here.