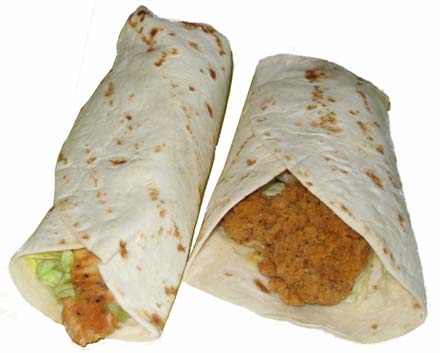 I wonder what’s a worse fate for a chicken: To be a grilled or crispy piece of chicken in the new McDonald’s Honey Mustard Snack Wrap.

Sure, there are even worse fates for chickens, like bird flu, being used in some screwed up way in a Jackass stunt, Chicken McNuggets, dancing naked in the Peter Gabriel “Sledgehammer” music video, or being eaten by Nicole Richie, then being regurgitated by Nicole Richie.

Unlike the original Ranch Snack Wrap, which only comes with crispy chicken, the honey mustard one come with either crispy chicken or grilled chicken, which is probably healthier than the crispy version, unless McDonald’s has found a way to grill things by sticking them in hot oil.

Along with your choice of chicken, the Honey Mustard Snack Wrap also comes with shredded cheddar jack cheese, lettuce, a sweet and tangy honey mustard sauce wrapped in a flour tortilla, and for some, it also comes with the guilt of knowing that you’re eating another McDonald’s product despite your promise to swear off of it after watching the documentary Super Size Me.

The grilled version has 260 calories, 9 grams of fat, 3.5 grams of saturated fat, 0 grams of trans fat, 45 milligrams of cholesterol, 800 milligrams of sodium, 27 grams of carbs, 1 gram of dietary fiber, and 18 grams of protein.

Both versions are about six or seven inches long, which is either small, big, or just right, depending on how big your hands or cock is. For me, the size of the Honey Mustard Snack Wrap was wayyyyyyyy too small and I wished that it was a more reasonable nine to ten inches. But then again what do you expect for some thing that costs just $1.29?

So in the end, which Honey Mustard Snack Wrap do I prefer and which is the worst fate for a piece of chicken, crispy or grilled?

Well, the crispy version tastes better, but the grilled one is healthier. However, the honey mustard sauce had kind of a weird sweet deli mustard spicy taste to it, so it turns out that the worst fate for a piece of chicken would be to end up in a Honey Mustard Snack Wrap and I prefer neither the crispy nor grilled versions of it and I’d rather go buy the much better original Ranch Snack Wrap instead.

(Editor’s Note: Thanks to Impulsive Buy reader Danton for letting me know about the McDonald’s Honey Mustard Snack Wrap.)

Item: McDonald’s Honey Mustard Snack Wrap
Price: $1.29
Purchased at: McDonald’s
Rating: 2 out of 5
Pros: Now able to choose between grilled and crispy chicken. Decent price. Grilled is healthier. Crispy is better tasting.
Cons: Honey mustard sauce is kind of weird tasting. Kind small for my big…um, hands. Breaking your promise to not eat fast food. Being in a Jackass stunt. Being regurgitated by Nicole Richie.