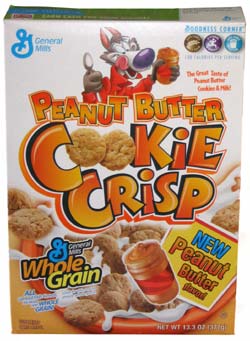 Recently, Impulsive Buy readers Kaitlin and Joseph each emailed me to tell me about the new cereal, Peanut Butter Cookie Crisp. I was exciting about to learn about it, because Cookie Crisp is one of my favorite cereals. However, my skepticism kicked in and I couldn’t totally believe that it existed.

Kaitlin even directed to the General Mills website that had information and a picture of Peanut Butter Cookie Crisp. However, in my eyes, the website was like the famous Surgeon’s photo of the Loch Ness Monster or the grainy video footage of Bigfoot. It was something that could be easily explained.

The Loch Ness Monster photo is actually a photo of Motley Crue drummer Tommy Lee floating nude on his back in a lake and the Bigfoot footage is just a video someone took of Robin Willams going on a hike.

As for the Peanut Butter Cookie Crisp, I thought it was something someone created in Adobe Photoshop. I think someone with mad Photoshop skills created the box and a hacker posted it on the General Mills website.

How easy is it to create a fake box? Well, I have crappy Photoshop skills and I created a box of Marvios (see picture below)

For me to believe Kaitlin and Joseph, I needed tangible proof, and I got it while walking through the cereal aisle at the national grocery store chain I usually shop at. 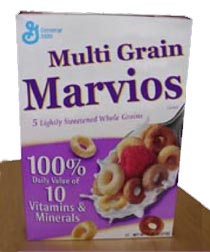 When I first saw the box of Peanut Butter Cookie Crisp on the shelf, I did the things that most people do when they don’t believe what their seeing. For those of you who have seen mirages, boobs bigger than human heads, people with three nipples, or have seen how buff Carrot Top is, you know what I’m talking about.

First, I made bug eyes, which is when you open your eyelids as wide as you can. Then I rubbed my eyes to make sure my they were clean and looked again. Then I squinted at the box to make sure I was seeing it correctly.

Well it turned out that Kaitlin and Joseph were right and I was wrong. Just like I was wrong about my prediction that the members of *NSYNC, the Backstreet Boys, and 98 Degrees would form a pop supergroup called White Bread, modeling it after rock supergroups Velvet Revolver and Audioslave.

I picked up a box of Peanut Butter Cookie Crisp and when I got home I tried a bowl of it. After the first spoonful, I thought that it was pretty good. It was definitely better tasting than the Peanut Butter Toast Crunch cereal the Impulsive Buy reviewed last year.

The cereal stayed crunchy in milk for a decent amount of time. In my mouth, the cereal was crunchy at first, but after that it seemed like it melted in my mouth, which made me think either General Mills intended the cereal to do that or my saliva is like molten lava.