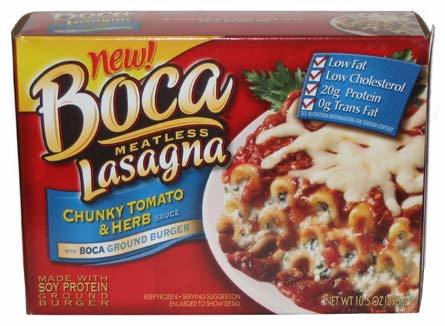 Have your parents ever tricked you to eat something you didn’t like?

Mine did and that something was liver.

On that fateful day, I knew something was up because I could smell the stench of deceit from my room. It smelled like rotting meat.

Of course, things could’ve been worse. If they tried to make me drink coconut milk by telling me it was regular milk AND feed me peas by telling me they were green Sixlets, that would’ve been the terrible tasting torture trifecta.

From that moment on, everything I thought and believed came crashing down around me.

I soon discovered my parents were Santa, putting the toys into my Christmas stocking. Then I realized my parents were the Tooth Fairy, putting quarters under my pillow. Then I found out that wearing Underoos in the fifth grade was not cool. Then I discovered that knowing New Kids on the Block dance moves did not make me a good dancer.

Oh, if only they had the Boca Chunky Tomato & Herb Lasagna back in those days, because then my parents would’ve had an easier time trying to trick me to eat something that was healthy for me — and maybe the Tooth Fairy and Santa Claus would still be alive in my head and not just in my heart.

It’s hard to believe the Boca Chunky Tomato & Herb Lasagna was low-fat and low-cholesterol, because it tasted pretty good. It had a nice little spicy tomato taste and I honestly couldn’t tell there wasn’t any meat in it. Although, the cheese looked like it could be used for Barbie plastic surgery, but it added a little more flavor to the lasagna.

Oh, if only Garfield the cat was real and not a comic strip character created in the mind of Jim Davis, then we would find out if Garfield could tell the difference between the Boca Chunky Tomato & Herb Lasagna and the usual meat lasagna.

But then again, Garfield looks like he would eat anything — even liver.