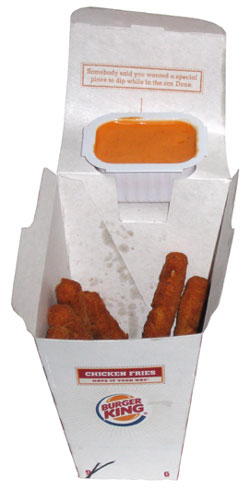 Sometimes there are ideas that when I first hear about them, I say to myself, “That’s a really good idea.”

But then when I’m sober and I actually see the product, I take back what I said and replace it with something like, “Dammit! I can’t believe I’m wearing men’s capri pants! Damn you, vodka! Damn you!”

Well, it happened to me again with these new Burger King Chicken Fries, which are thin strips of all-white meat chicken breast coated with a seasoned batter.

Damn you, vodka! Damn you!

When I read about them a few months ago, I thought that it was a really great idea, because I imagined that Burger King would take the same sleeves they use for their regular french fries and just fill them with chicken fries instead.

Unfortunately, just like all my imaginations that involve me being a ceiling mirror at the Playboy Mansion, what I imagined the chicken fries were, didn’t come out the way I had hoped.

Instead of a heaping of chicken fries, I had the option of having either a six-piece snack pack or a nine-piece “value” meal, which I decided to purchase. Although, after seeing what the chicken fries looked like, I’d suggest you avoid the “value” meal, because it wasn’t much of a value.

Each chicken fry was a little thicker than BK’s regular french fries, roughly three inches long, and depending where your mind is at, they look like either skinny fried mozzarella sticks or fried tampons.

The BK Chicken Fries comes with a buffalo sauce, which I thought wasn’t bad and tasted better than the buffalo sauce I got with the McDonald’s Chicken Selects I reviewed last year. You can also replace the buffalo sauce with either a barbeque, honey mustard, sweet and sour, or ranch sauce.

Probably the most impressive part of the BK Chicken Fries was the container they came in. Just like the Transformers, this container had more than meets the eye. It had a lid that folds back and creates a place to hold the container of buffalo sauce, as you can see in the picture above.

The container was also designed to fit into your car’s cup holder, so that you can eat while driving, talking on the phone, and yelling stuff at your rowdy kids, like “Be quiet!” or “You were all mistakes!”

I would’ve tried eating them in my car, but I was afraid of getting buffalo sauce on my new red and black leopard print car seat covers.

Overall, I wasn’t very impressed with the BK Chicken Fries. With them being so skinny, receiving only six or nine pieces made them seem overpriced. Plus, with so little chicken in each fry, it seemed like each fry only contained the seasoned batter.

However, I really did like the ingenuity of the container they came in and I now believe that chickens have another fate to look forward to that isn’t as embarrassing as becoming chicken nuggets.

Item: Burger King Chicken Fries
Purchase Price: $4.59 (9-piece value meal)
Rating: 5 out of 10
Pros: Buffalo sauce was decent. Nifty container made for those who like to eat on the go. Better fate for chickens than becoming chicken nuggets. Vodka.
Cons: Value meal wasn’t much of a value. Only six or nine pieces. Not much chicken in each fry. Looked like a fried tampon. Men wearing capri pants. Vodka.