If peanuts were the measurement of being xtreme, elephants would be doing Mountain Dew commercials and Mr. Peanut wouldn’t be wearing a top hat and holding a cane, instead he would be wearing a helmet, riding a skateboard, and constantly cracking his nuts (or himself) while trying to do railslides down a set of stairs.

The Limited Edition Snickers Xtreme has an xtreme amount of peanuts. As you can see in the picture below, it’s frickin’ full of peanuts. It’s perfect for someone who loves peanuts so much that if it were legal, they would marry them, despite the fact it would be REALLY difficult to consummate the marriage.

To figure out how much more xtreme Snickers Xtreme was than regular Snickers, I decided to dissect each candy bar like it was a frog in a biology class, a cadaver in an anatomy class, or a female contestant on The Bachelor.

However, before I started cutting open each candy bar, I thought just dissecting them wouldn’t be xtreme enough. After all, I was dealing with a Snickers Xtreme. So I decided to try and do an xtreme dissection that involved me blindfolded. underwater without oxygen, surrounded by sharks, and using a live swordfish as my cutting instrument. Unfortunately, the bill of a swordfish doesn’t cut very well, but does stab very well, and I can only hold my breath underwater for ten seconds, so I had to settle for a regular dissection.

Get it? Nougat! No get! Hahahaha! Oh, I think I just caused each my former creative writing professors to die a little inside.

Despite the xtreme amount of peanuts, I thought the Snickers Xtreme didn’t have a strong peanut taste due to it being kind of drowned out by the xtreme amount caramel. Regular Snickers has peanut butter nougat, which probably would’ve helped with the peanut flavor, but it would probably be hard to try and stuff some in the Snickers Xtreme, since doing that is much like trying to put a hat on Donald Trump’s head, because his head is the size of a blimp and his toupee uses its strand to keep hats away. 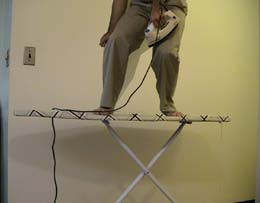 However, after eating a Snickers Xtreme my life became a little more xtreme. You would think the probability of my life getting more xtreme because of the Snickers Xtreme is about the same probability of having a good time with someone whose number you found in a public restroom, but for a short time the most mundane parts of my life became xtreme.

For example, eating ice cream. After eating the Snickers Xtreme, I wasn’t chowing down on my favorite dairy product with a spoon, instead I took it to the xtreme by eating it with a ladle. My ironing was even taken to the xtreme. I didn’t just iron on my ironing board, I ironed on top of my ironing board, riding it like a surfboard with me ironing my clothes while wearing them.

Item: Limited Edition Snickers Xtreme
Price: 59 cents
Purchased at: 7-Eleven
Rating: 6 out of 10
Pros: Good. More peanuts, if you LOVE peanuts and want to be together through sickness and in health.. Kinda crunchy. Temporarily made mundane parts of my life xtreme. Eating ice cream with a ladle. Xtreme ironing.
Cons: More peanuts, if you’re allergic to peanuts. Despite an xtreme amount of peanuts, it didn’t have a strong peanut taste. No get nougat. Not really more xtreme than regular Snickers. Not being able to do an xtreme dissection. Xcessive use of the word “xtreme” in this review. Donald Trump’s toupee.